Large Yellow Moth
July 18, 2009
I need help with identification of another moth. This one is a large yellow moth and was found in Uvita, Costa Rica also.
Thanks!
Whitney
Uvita, Costa Rica 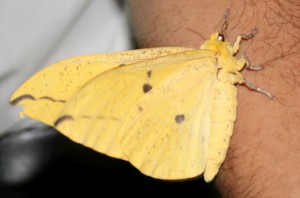 Hi again Whitney,
We believe this is a female Eacles species, possibly Eacles masoni, based on some images on the World’s Greatest Saturniidae Site.  There is a U.S. species known as the Imperial Moth and there are several subspecies of the Imperial Moth, Eacles imperialis found in Costa Rica as well.  Again, we will be copying Bill Oehlke on this response so that he may catalog the sighting, and perhaps he will be able to clarify exactly what species this is.  Your close winged view is not one found on the WGSS website.