Large beetle in E. Washington state
July 18, 2009
We found this large black/brown/red beetle with reddish legs and a red underside on our driveway on July 18 in Spokane Valley, WA. It was discovered just after dusk. It is 3-4 inches in length. When touched on the back, it would raise it’s back legs to make a scraping/hissing sound. What is it? What does it eat? Are they common in this area (we’ve never seen one before)
Lobdells
Spokane Valley, WA 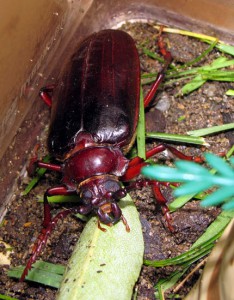 Dear Lobdells,
This is a California Root Borer, Prionus californicus.  It ranges from Canada to Mexico on the West Coast, as far inland as Nevada and Montana.  According to Charles Hogue in Insect of the Los Angeles Basin, the larvae bore into roots of oaks, madrone, cottonwood, fruit trees and eucalyptus.  Adults emerge and fly in early summer and are attracted to lights.  The beetle is not considered rare, but populations may be very localized. Your specimen looks like a female as males are smaller and have more exaggerated antennae.