Harvestman, Molting? or attacked by Fungus?

On July 13, 2009 · Category: attack of the fungus, Opiliones and Harvestmen · Add Comment

Wings or no?
June 2, 2009
I came across this guy in my kitchen and immediately snapped a picture of it. I then got it in a jar and released it outdoors. The wing-like tentacles on its back moved around almost like an octopus. I’ve never seen an insect like this.
Curious Dude
Western NC USA 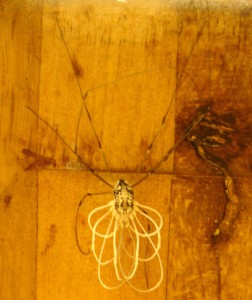 Dear Curious Dude,
Those are not wings, and this is a Harvestman in the order Opiliones, but we need to seek advice on what is actually happening in this photo.  We believe you have photographed the molting process, but we need confirmation on that.  Harvestmen are sometimes called Daddy Long Legs.

Update from Eric Eaton
Hi, Daniel:
The harvestman looks like it has succumbed to a fungal attack.
Eric

Harvestman: Molting? or Attacked by Fungus?