what is this thing?
July 11, 2009
I’ve seen a few of these the past few nights, only at night. The ones I’ve seen are near a light source, and rather inactive. Two sets of wings, a soft abdomen, 6 legs, 2 antennae, and claw like pinchers at it’s mouth. this one is about 2.5″ long and a wingspan of 3.5″. I have never seen anything close to this before.
Ryan
West suburbs of Chicago 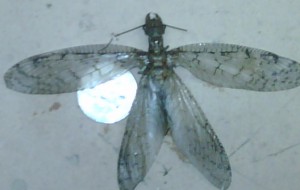 Hi Ryan,
This is a female Dobsonfly, a common insect throughout the eastern U.S.  We also just posted a photo of a male Dobsonfly from Ecuador.  You should compare the modest mandibles on your female to the impressive set on the male of the species, though we suspect the Ecuadorean individual is of a different species.