Snake Eater
Sun, Jul 5, 2009 at 6:44 AM
I found these guys in my yard. They were feasting on the carcass of a red bellied water snake, but I have also seen them eating a copperhead carcass earlier this year. I live in Raleigh, North Carolina. My yard is in the outer limits of 30 year old subdivision near a lake, several creeks, with an undeveloped heavy woodland/wetland area of over 2000 acres adjoining the property. These photos were taken on July 4, 2009 at around 8:30 pm. They have been devouring this snake carcass for about 5 days now. They appear to be about 1 inch in length. They are black with white paterns on their neck. They have a broad back with black wings and are capable of flight. They seem to have a small black tail extending beyond their wings
I have lived in this area for 35 years and I have never seen these insects prior to this year. At first I thought they had white skulls on their backs, but now with the detail of photos I can see it is a different creepy pattern. So, what are these things?
Bugging Out
Raleigh, NC 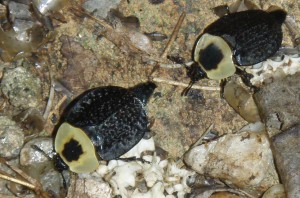 Dear Bugging Out,
Your visitors are American Carrion Beetles, Necrophila americana.  BugGuide indicates that they eat maggots and carrion and states that they are:  ” Found on carrion and decaying fungi. Larvae eat carrion, larvae of flies and other carrion beetles. Eggs are laid singly on or near carrion. They prefer larger carrion, Milne (4)states “rat-sized or larger”. Larvae hatch in a few days, feed in or under carcass, and pupate in a nearby soil cell. Larvae may prefer dried skin, bits of flesh after maggots have departed. Adults overwinter. ”  Over the years, we have gotten numerous reports of them being associated with the corpses of snakes, but we have also gotten photos of them with the carcasses of mammals and molluscs, and even photos of them feeding on fungus.

Carrion Beetle Larvae from the UK