Female Eastern Hercules Beetle
Tue, Jun 30, 2009 at 7:55 PM
It’s been a long time since I sent you any pictures, but I finally have a good one. Hubby heard a noise on the siding of the house this evening, and found the culprit. According to the pictures on WTB, it looks to be a Female Eastern Hercules Beetle. We took some pictures in the grass, but hubby offered to hold the girl, so I was able to get a good closeup. I’ve reduced the size, so as not to clog the website. If you need better quality, let me know.
Caron
Culpeper, Virginia 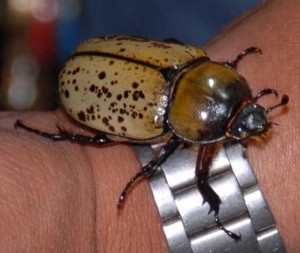 Hi Caron,
We just finished posting two letters, one with photos of a male Eastern Hercules Beetle and one with photos of a female. Your letter is a wonderful addition to the two previous letters as it gives our readership an idea of the range as well as the timely appearance of these gorgeous beetles. We also now realize not making the Eastern Hercules Beetle the Bug of the Month for July was probably a big mistake.