Is this a bee or fly?
Tue, Jun 16, 2009 at 4:53 AM
Nearly everyday I come home from work to find one or two of what look like skinny bumblebees on my front porch clinging to the screens. The porch was just recently screened in and doesn’t have a door yet which is how they are getting on the porch. The bees/flies are pretty docile and easy to catch. I’ve been able to catch them in wads of cloth and then I just open the cloth outside and they fly away. I have a large flowerbed right outside the porch with lots of blooming flowers which is probably what is attracting them in the first place. I see plenty of the regular fat bumblebees in the garden all the time. I live in central florida and this has been going on for about a month now.
Just in case the pictures are not clear enough you can also see them in my photobucket acount, which is as follows.
Kara
central Florida, Citrus county 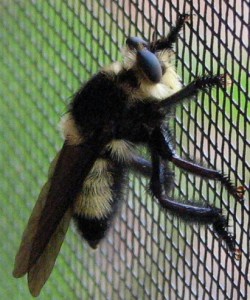 Good Morning Kara,
What a magnificent image of a Southern Bee Killer, Mallophora orcina, a species of Robber Fly that is a very convincing bumblebee mimic. Souther Bee Killers prey on insects, including bees. Its proximity to your flower bed can be explained if that flower bed is frequented by bees. BugGuide also has information on this species.  BugGuide indicates this of the genus:  “Large, fuzzy, bee-mimicking robber flies. Resemble Laphria , another genus of robbers that mimic bumblebees, but is even hairier and has antennae with a very thin terminal final segment, whereas Laphria has thick antennae.”  Your specimen has very thin antennae.