Lefty and Mate have spawned!!!

12 May 2009
Lefty, the Angelfish with one pectoral fin, and mate have spawned. I am relatively certain the mate is the female. These are the two Angelfish that have been boarding at Tropical Imports for a month or more. They were brought home to the new 29 gallon aquarium on Sunday and their spawning tubes soon manifested. I suspected eggs would be laid today based on behavior last night. I eagerly await evidence that the spawn is fertile. 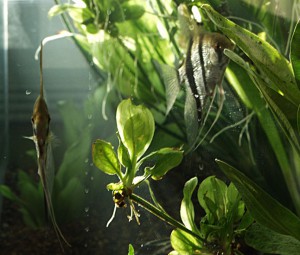 Lefty is on the left hand side and the eggs are on the leaf on the upper right. The mate has been fanning the eggs since Lefty only has one fanning fin. 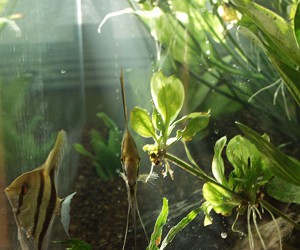 Lefty (center) with Mate and eggs (leaf on upper right)

I just got done feeding the new parents some tubifex worms. I have been struggling with the camera that does not focus well. 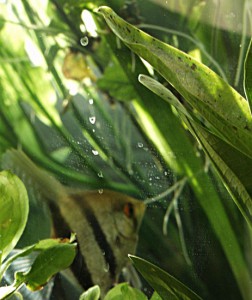 Update: Saturday 16 May 2009, 6:27 AM
The eggs hatched sometime Thursday because there were wrigglers when I returned from work Thursday afternoon. It is now Saturday and the fry have been moved three times at least. The spawning occurred on the right side of the aquarium near the filter intake, but the fry have been moved to the left side of the aquarium near the filter return and near the window that gets late afternoon direct sun. This window faces west and is on the north side of the house. The female stays close to the eggs while Lefty seems to like patrolling the right side of the aquarium.
I also captured 11 fry from the nursery aquarium this morning and they are floating in the 50 gallon aquarium so the water will adjust. I fed the tank inhabitants first. The Tetras are still not active and early morning is the best time to put baby brine shrimp in the aquarium to feed the Angelfish because they get to eat all of the nauplii. The Tetras tend to be pushy feeders, so when I feed in the afternoon or evening, I generally start with frozen adult brine shrimp to fill up the Tetras and also to begin introducing the Angelfish to adult food. It has been impossible to determine if there are 30 fry in the 50 gallon tank because counting that many fish is not easy. I have found no corpses, so unless the smaller fry were sucked into the filter, there should be 30 Angelfish in the aquarium. Adding 11 more will bring the total to 41. There are still at least 40 small fry in the nursery aquarium.
There have been a few more losses in the community aquarium. It seems I only have 3 Glowlight Tetras left and 4 Panda Cory Catfish. I still have 6 Blue Emperor Tetras, though one has popeye, 8 Cardinal Tetras and 4 Black Phantom Tetras. The Rams and the pair of Angelfish are all doing well. I think the Glowlights and Catfish do not like the warmer temperature of the aquarium. I can’t seem to get the temperature below 86º despite trying to dial down the thermostat. I should find out if there is a trick to this. It is also possible that the light is heating the aquarium. Also, since I don’t have air conditioning or heating in the house, when we had the heatwave, the temperature rose to 90º. 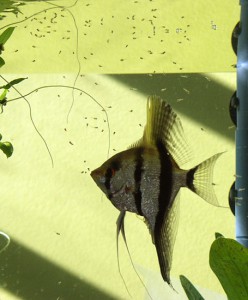 Update: Monday 18 May 2009, 5:52 PM
The fry became free swimming today. The parents are having a difficult time herding the youngsters. 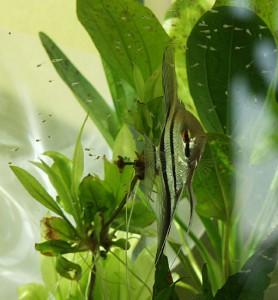 I covered the filter intake with loosely arranged organza, but I got paranoid that the young might get sucked in, so I shut off the filter. When they are a bit stronger, I can turn the filter back on. I have squirted a few eyedroppers of live baby brine shrimp and some of the fry are taking food. It is so sweet seeing the parents with the fry. I swear there are 200 youngsters. 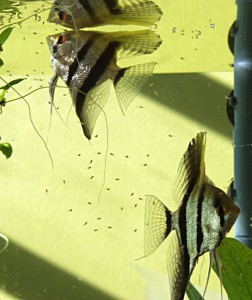 I also moved 34 more fry from nursery aquarium to 50 gallon aquarium bringing the total there to 75. 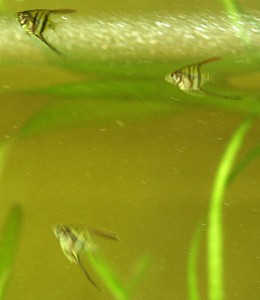 Update: 20 May 2009, 6:49 AM
We just finished moving the last 24 fry from the nursery aquarium to the 50 gallon aquarium. This way we can try to raise some of Lefty’s offspring in the nursery aquarium if necessary. Lefty’s fry have been gobbling up newly hatched brine shrimp. We may also move the airstone to Lefty’s aquarium to circulate the water since the filter was unplugged. There are now 99 fry in the 50 gallon tank.

Update: Naming the other adult Angelfish
Thursday, 21 May 2009, 5:50 AM
When I returned from work late last night, the timers had already shut off the aquarium lighting, so I turned the lights back on to feed the fish. After eating, the original pair of Angelfish began acting in a very territorial manner. They chased the rams, tetras and catfish away from the large Amazon sword plant and began to clean the algae from its leaves with their mouths. When they chase fish, they turn 90º to move faster through the water.  They look unusual when horizontal.  They also move their ventral fins rapidly, like they are plaing drums.  They are acting like they want to spawn. I am going to name them Boris and Media Luna. Lefty’s mate still needs a name.
Lefty and mate who are in a 29 gallon aquarium are still acting like good parents, trying their best to keep the fry together in a school, and picking up stragglers with their mouths and spitting them back into the crowd.

4 Responses to Lefty and Mate have spawned!!!