small, rust-colored but with black stripes/markings around tail
Thu, Apr 23, 2009 at 3:32 PM
I was outside and a small (maybe 1/2″) bug flew into my shirt. It may have bitten me, but I’m not sure. It’s rust-colored with some black stripes or markings around its tail. It has wings. I’ve attached a photo of it. I’ve never seen a bug like this before. Could it be poisonous? Do you think it could have bitten me? Thanks for any help you can provide.
Anne
Nashville, TN 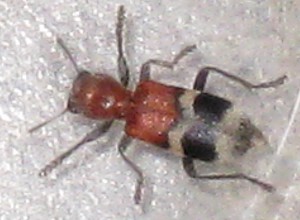 Hi Anne,
We are always amused at the number of people who write to us wanting “buts” identified.  This is one of the most commonly encountered species of Checkered Beetles, Enoclerus nigripes.  It is entirely possible that it bit you, but Checkered Beetles do not bite people except when threatened.  They are not poisonous.  BugGuide has numerous nice images of this species.

One Response to Checkered Beetle