Indian Meal Moths
Sat, Mar 7, 2009 at 4:25 PM
First of all, let me say I love your website. I moved from a fairly new and well-insulated family house into a pretty old appartment building, ground level, a few months ago. I’m no more a bug lover than the next person, so I’m just happy I found this site, which has saved me from freaking out a couple of times. First time with a classic case of house centipedes. Now, I only wish! I haven’t killed them (at least not once I knew what they were), but for some reason there are none around anymore. Maybe because of winter? Anyway, now I found out that I have some Indian Meal Moths. They’ve been around on and off. During summer and fall I was pretty sure they were just some normal moth that came in from outside (especially since there was only one or two of them), but in the middle of the winter, much less probable. So I researc hed your website, ended up cleaning my whole pantry (and yes, some stuff was infested, I’m still grossed out). I do still have a few questions, though. Do these types of moths also have cases at the larva stage, or am I dealing with more than one type of moth if I find discarded or unhatched cases? Might meal moths also infest pasta, raisins or even chocolate (I found a larva in an old Nutella jar, which fortunately I hadn’t eaten from in very long)? Also, they seem to be able to munch through thin plastic wrappings….just how thick a plastic bag can they break open? Last question, apart from transferring everything to plastic and glass containers, is there anything that might keep them away, sort of like cedar wood with clothing moths? I tried a bit of rosemary branches in the past, seemed to work, but when I cleaned up, the little pile of rosemary needles had unhatched cases in it….gross. (For the record, I have cleaned the pantry regularly since I moved and I do throw out anything that sits around too long…)
Thanks for your time, I know there are a lot of questions. I’ve included a picture of two meal moths apparently reproducing, which I found while cleaning the said pantry. Thought it might be an interesting addition to the nice pictures on your website. I guess spring is coming for everyone! 😛
Genevieve
Ottawa 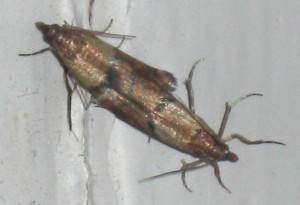 Dear Genevieve,
The cases you are finding may be the cast off larval or pupa skins. when the insect metamorphoses, it leaves behind the exoskeleton. The caterpillars form a silken webbing in the food source. According to BugGuide, the larvae of the Indian Meal Moth “infests a wide variety of stored food products such as flour, oatmeal, dried fruits, seeds, nuts, powdered milk, biscuits, chocolate, and bird seed ” and “spin silken threads as they crawl through stored products, creating a matted layer of product, frass, and pupal cases.” Vigilance is the best method for controlling Indian Meal Moths and other pantry pests. Your question regarding chewing through plastic may need an expert to answer.

Update: Mon, Mar 9, 2009 at 8:32 AM
Thank you for the information. I read somewhere online that bay leaves might be a good way to repel insects from your food stores, so I might give it a try. I’ve captured the remaining adults, so as to limit the damages, and was a bit surprised this morning to find eggs in the jar. They’re still laying them, it’s sort of interesting to see. Anyway, I’m keeping tabs on that (taking pictures and everything) from now on, because I strongly suspect an already-infested bag of rice was the source of the problem (the need to pinpoint a source has become quite strong to my curious mind). I put a few rice grains and a bit of what looks disturbingly like eggs in another jar, and I’m also keeping tabs on that. The egg-like grains were already in the bag before I even opened it. Well, this said, I’ll let you know if anything interesting comes up from all of this.
Genevieve, Ottawa, Canada
P.S. I don’t know if it’s of any interest, pantry moths being very common, but I’ve enclosed pictures of the said moths and eggs…they’re kind of blurry, but it’s the best quality I could get out of my generic Canon. The whitish blurs are the eggs (but obviously not the pile of rice grains!)

Thanks for teh update Genevieve.  Your photo is a bit too blurry to post.  Many aromatic plants are said to repel moths, including your previously mentioned rosemary.  We have also heard wormwood (Artemesia), lavender and mint will repel moths.  The cedar you mentioned may also work.