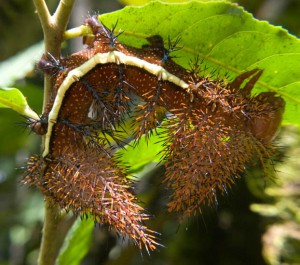 Hi Rien,
We are posting your image right before leaving for work and haven’t the time to research the species. We are quite certain this is a stinging caterpillar in the genus Automeris, a large genus that includes the North American Io Moth. When we have a chance, we will browse through the World’s Largest Saturniidae Site to see if we can identify the species.

Update:
Fri, Feb 20, 2009 at 10:47 AM
Daniel:
What an interesting run of awesome but dangerous stinging caterpillars!  I think you called it right, it is in the genus Automeris (Saturniidae : Hemileucinae). This is a very large New World genus (150 species and subspecies by one count), so making an absolute identification is very difficult. However, based on appearance and distribution I believe it can be narrowed down to A. egeus or A. larra. Of the two, I think A. egeus is the closer match. Regards.
Karl
http://www.silkmoths.bizland.com/kwaegeus.htm

Thanks for the assistance Karl.  Once a word or term enters the zeitgeist of the world wide web, search engines latch onto it quite quickly.  A few weeks ago we answered and posted quite a few letters from Namibia.