From the monthly archives: "January 2009"

Big namibian grashopper
Fri, Jan 9, 2009 at 2:01 PM
Big namibian grashopper
Hi, we stumbled across this large and very well camouflaged grasshopper in august in a mountain range in Namibia. When we were getting very close, it started to rub its hind legs against its abdomen – making quite a loud noise (obviously to scare us away). Very fascinating bug this one. What species can it be?
Geir
Namibia 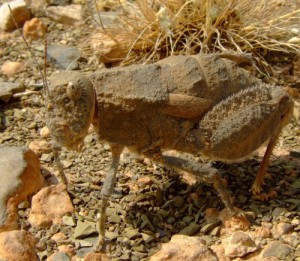 Hi Geir
Wow, that is some impressive looking grasshopper. It is toadlike. We need to do some research to try to identify its family, genus and species, but perhaps by posting your magnificent images, one of our readers will be able to assist with the answers. 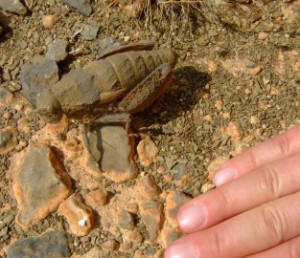 Update: Sat, Jan 10, 2009 at 4:08 PM
Hi Daniel:
Wow indeed! This looks like a Stone Grasshopper (sounds appropriate), in the genus Trachypetrella . There are apparently 3 species reported, although a recent paper suggests they are likely conspecific ( Irish and Roberts 2006 ) under T. anderssonii . Interestingly, they are referred to as raniform (i.e. froglike) grasshoppers and one of the species synonyms is T. rana , although I would agree with you that they look more ‘toadlike’ than ‘froglike’. Regards.
Karl

Unidentified predatory red bug/beetle
Thu, Jan 8, 2009 at 3:29 AM
This bug (beetle?) appeared about five years ago in our rural, coastal area (Cintsa, East London, South Africa) and has been terrorizing the undergrowth ever since. Individuals patrol paths and garden areas, seeking prey. Groups participate in the kill, biting or stinging the victim repeatedly until it stops moving. They will then sit on the prey, presumably feeding, sometimes for the rest of the day. They have been observed attacking and feeding on centipedes, spiders and caterpillars (particularly the large black caterpillars that feed on African plum trees – see image).
They are red/orange with darker areas around where wings should be. They appear to have a pointed snout. We have observed them clustering under cover in larger groups overnight.
Dave Roberts
Cintsa, East London, South Africa 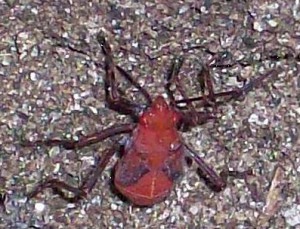 Hi Dave,
You just made us late for work. We really wanted to identify your predatory red Hemipteran nymphs as well as the Saturniid Caterpillar they are feeding upon, but our internet connection is so slow right now, we need more time. We are posting this as unidentified right now, but we are confident we will be able to assist you in a proper identification either alone or with the assistance of our readership. The Hemipterans don’t look like Assassin Bugs, which would be a likely candidate. 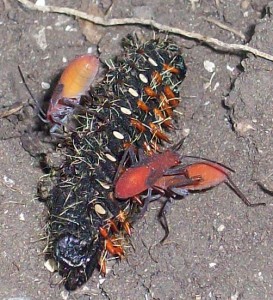 Update:Predatory Red Hemipteran Nymphs feeding on Unknown Saturniid Caterpillar
Fri, Jan 9, 2009 at 2:20 PM
Hi Daniel:
I think the predatory bugs are probably immature assassin bugs of some kind, but I am out on a limb even with that. The Saturniid caterpillar looks like Imbrasia wahlbergi . An adult of this spectacular species appeared on WTB previously (Saturniid Moth from South Africa: Imbrasia wahlbergi – May 7th, 2007). Regards.
Karl

Thanks for the ID on the Imbrasia wahlbergi Caterpillar Karl. As we wrote to Dave this morning, we were running late for work. As things played out, we got to LACC to teach about 6 minutes before class started. We were going to search the World’s Greatest Saturniidae Site which contains the Kirby Wolfe link you provided. We will have to spend some time researching the Hemipteran nymphs now. They behave like Assassin Bugs, but don’t look like Assassin Bugs. Perhaps they are Predatory Stink Bugs, but they don’t look like Stink Bugs either. They actually resemble plant eating Hemipterans. We have run several images in the past of social feeding Assassin Bugs that feed on Millipedes, Ectrichodia crux, but these individuals look different if our memory serves us correctly.

Update from Eric Eaton
Sayturday, January 10, 2009
The hemipterans are likely in the family Lygaeidae. Many (most?) of the Heteroptera are opportunistic scavengers or predators. I once saw two small milkweed bugs feeding on a dead honeybee, for example. But, the bugs in the image are nymphs, so no way to be certain for sure (though I think it is safe to rule out assassin bugs).
Eric

Update from Dave:  January 11, 2009
Thanks, bug masters! Apologies for the omission of some info. Length is around 8-12mm, and it was a millipede they were eating, not a centipede. The millipede assassin bugs look pretty close, but they’re a little too red, and the bugs in question don’t have the third black spot on their back. I think you nailed the caterpillar – thanks again.
I’ll get the search going to find the adults.

Moth Caterpillars from Costa Rica, one parasitized by wasp

Spider In Kandooma Maldives
Wed, Jan 7, 2009 at 12:13 PM
Dear bugman, We found this spider in out open-air bathroom in December, on Kandooma Island, Maldives. It seems to have some legs missing. The tiles were approx an inch square so it gives some idea that this spider was approx 3 inches across. My daughter has worked on the island for 9 months and it’s the first time she ever saw one there. What was it & was it poisonous? Thanksso much, Edwina from UK.
Edwina
Kandooma Island, Maldives 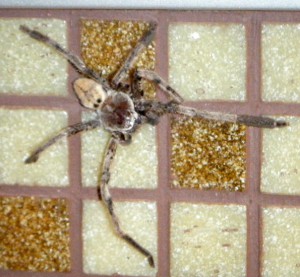 Hi Edwina,
This is a Giant Crab Spider in the family Sparassidae, but we are unable to identify the species.  Many spiders in this family are nocturnal hunters that do not build webs.  We frequently see individuals from the genus Olios with missing legs.  The Giant Crab Spiders are sometimes called Huntsman Spiders.

Spider from Borneo is Huntsman Spider

Have seen these around my house in Los Angeles
Wed, Jan 7, 2009 at 6:43 PM
They hop like grasshoppers. Look a tad like bees but longer and narrower. Look a little like the picture in your left margin actually. We tented the house and there were a ton of these (if I recall correctly) found dead on the carpet next to the fireplace in the living room. Have seen a few since living. We just moved in a week ago. Tenting was 4 weeks ago. Love your website! Thanks.
Family of four with only one bug friendly member
Los Angeles 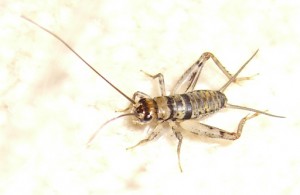 Dear Family of Four,
This is an immature Cricket, probably a House Cricket, Acheta domesticus. According to Charles Hogue in his book Insects of the Los Angeles Basin: “The species was apparently introduced into the eastern United States from Europe, although its original home may have been Africa. It has since become widespread in southern California, where it is usually associated with human habitations. Lacking a dormancy period and hence being easy to raise, it is sold as fish bait and animal food in pet stores.” Perhaps the previous home owner raised or a nearby neighbor raises the crickets to feed to pets.

Update:  February 6, 2014
We just received a comment indicating that this is probably a [male] Tropical House Cricket, Gryllodes sigillatus, and after looking at the photos posted to BugGuide, we are in agreement.

Crickets as food in Malawi 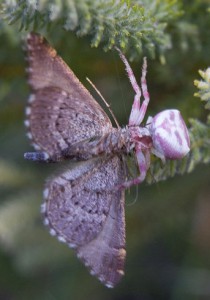 Hi again Brett,
We haven’t a clue about the moth, but the spider is a Crab Spider in the family Thomisidae. Crab Spiders don’t build webs, and many species sit camouflaged in flowers awaiting pollinating insects.

Update: Crab Spider eats unknown Moth in South Africa
Tue, Jan 6, 2009
Hi Daniel:
I can’t resist a twofer. The photo provides only a partial underside view of the moth, which looks like a Geometrid to me. Unfortunately, from the perspective of providing an identification, West Cape Province has over a 100 species of Geometridae and South Africa as a whole apparently has over 1000 species, most of them dressed in cryptic grays and sepias. The spider is indeed in the Thomisidae family, likely a flower crab spider in the genus Thomisus , of which there are at least 15 to choose from. The closest match I could find was T. citrinellus . Regards.
Karl

grasshopper???
Tue, Jan 6, 2009 at 12:59 AM
hi there. I was recently on a hike in Eshowe South Africa and came across this bug. It looks like grass hopper family to me, but I cant be sure. I’d love it if you could Identify it for me! 🙂
Michelle Krystle Govender
Eshowe SA 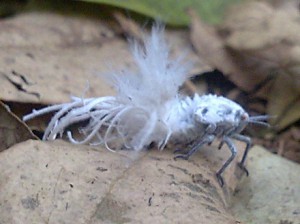 Hi Michelle,
We believe this is an immature Fulgorid Planthopper.  Other than that, we can’t give tou specifics on the species.  We have gotten numerous images from South Africa in the past week.

Green Leafhopper from the UK