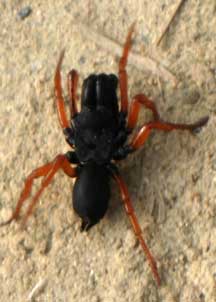 Thanks for the info as well as the high resolution image with plenty of surrounding habitat, which we cropped to a tight shot. We enjoy getting reports about this endangered, spectacular spider.

Hickory Horned Devil or Royal (or Regal) Walnut Moth Caterpillar Photo
Hi – My 8-year-old twins found this caterpillar on the street in front of our house (Aug. 21, 2008, Virginia Beach, VA) – we’re not sure what happened to it… Initially we thought he’d been run over (his mouthparts seem a bit damaged and there was liquid surrounding him – and very tiny ants were attacking him) but he didn’t really appear squished. We brought him in, rinsed off the ants and read a bit about him (which suggests that perhaps he fell out of a tree preparing to pupate and fell a bit too hard?) – and filled a jar with soft soil and what I hope are walnut leaves. He’s got a broken horn or two, and I’m not sure if he’ll make it (not sure what damage he’s sustained), but he is still moving around a little. Hopefully he’ll make it (we were afraid to leave him outside because the ants find him too attractive). Thanks for your site – my family and I use it almost every day to identify all the cool bugs in our yard!
Monica 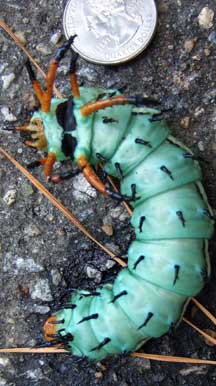 Hi Monica,
Your Hickory Horned Devil would also be an attractive snack for birds and other predators. There is no way of knowing what caused the trauma. We received three images of Hickory Horned Devils today, and expect to get many more in the next month.

Hello
Hi, bugman
8/21/08 My name is Siegrid, live in Washington, NJ (Warren). My mom and I walk path wood in Merrick Creek, NJ. I walk notice saw on path ground, show my mom saw it. That Cicadas mating, I think that brighter green male and dull green dark female, I think sure and get picture. Thank you
Siegrid Werner

Hi Siegrid,
Thank you for sending us this photo of mating Annual Cicadas or Dogday Harvestflies. We would not use coloration as a means of identifying the sexes. We found a website on the Periodical Cicada that has a great explanation on how to differentiate the sexes of Cicadas. In a paragraph entitled Song of Cicadas, Mike Raupp writes: “You can tell the male because he has a blunt abdomen. It’s rounded on the back, blunt abdomen. But if we lift up the wing and look very carefully just beneath the wing, we’ll see an organ called the tymbal organ. That white membrane at the end of my thumb– you can see it vibrating– is how he makes that sound, and it’s only the male that will call.”

Mystery Caterpillar
Hi,
We love your site! We have a mystery caterpillar that we’re hoping you can help us id. We found it in the sedum plants, but it didn’t seem to be eating them. It was right next to a skeletonized rose bush, but those little green caterpillars have been chewing on the roses all summer so I don’t know that the big caterpillar was also eating the rose. Oh, we’re in SW Wisconsin.
Thanks much!
Karen, Bronwyn, Connor and Piper 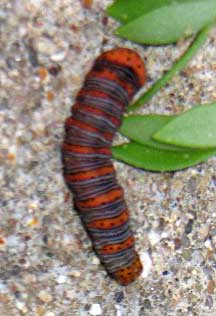 Identified before we could respond
(08/20/2008) Mystery caterpillar id’d
Hi Bugman,
After we emailed you this morning, we ended up finding our caterpillar, I think. Pearly Wood-Nymph ( Eudryas unio ) http://www.npwrc.usgs.gov/resource/insects/cateast/eudrunio.htm Here’s the mature moth: http://lepidopteraresources.homestead.com/GovNelsMoths.html Thanks,
Karen, Connor, Bronwyn and Piper

Dear Karen, Connor, Bronwyn and Piper,
You have done an excellent job of identifying your Pearly Wood Nymph Caterpillar. We are very pleased to see that some of our readership actually continues to search for their answers after clicking the “Ask WTB?” link on our site. We would not discount the possibility of this caterpillar being another member of the same genus though, as evidenced by images on BugGuide.

Please help !
Hi there.
I have been looking at picture of bugs and flies all over the internet for hours and I can’t seem to find anything that looks like the one I found, (see attached) I found it on my living room window in Munster Germany (Mid August). it was about 15 mm in length, with a red-ish colour. I was wondering if you could help identify it for me as I have small children and am worried that they might bite. Thank you.
Mrs Dwyer, Munster, Germany 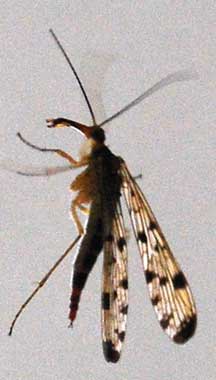 Hi Mrs Dwyer,
Despite its name and appearance, the Scorpionfly is perfectly harmless.

Hangingflies from Australia Courting and Mating

bandwing dragonlet-dragonfly species not on your site Hialeah Florida
Hello,
I took this photo in my yard yesterday (Aug. 19, 2008) the same time as the bee fly picture. I thought you already had a picture of this dragonfly on your site, but after I checked today, I didn’t see it. I googled for ‘Dragonfly species Florida’ and I’ve tentatively ID’ed it as a Band-Winged Dragonlet going by the one I found here- http://filebox.vt.edu/users/stcolli2/Dragonflies/Floridalist.htm (that photo isn’t as clear as mine, but I do think it’s the same species).
Marian Mendez 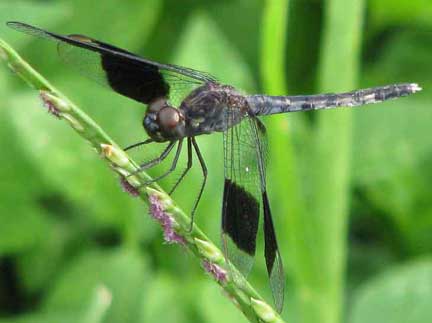 Female Bandwing Dragonlet
(08/20/2008) fem.banded dragonlet- Hialeah Fla.
I hadn’t intended to send another email today (Aug 20, 2008), but I snapped this dragonfly in pretty much the same place in my yard as the male Banded Dragonlet I sent you earlier today and I *think* it’s the female Banded Dragonlet. The coloring is lighter than some I’d seen, but possibly it’s a young one? The possibility of adding a pair to your site was irresistable. I love dragonflies. Considering the limitations of my camera, I was astounded that I got such a good closeup of her monkey-like face, so I’m sending 2 pics. Marian Mendez 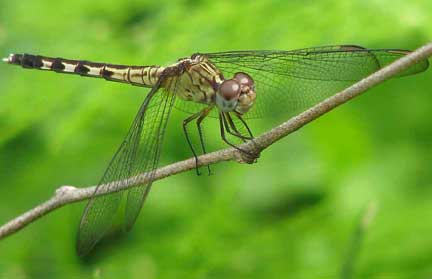 Hi again Marian,
BugGuide has numerous photos of the Bandwing Dragonlet, Erythrodiplax umbrata, and we agree with your identification. Interestingly, though BugGuide lists it as neotropical and ranging to Southern Florida and Texas, they do have a report from Ohio.