Red bee?
Hi,
I was wondering if you could tell me what this insect is? I saw it while hiking at Golden Gate State Park in Colorado. Thanks!
Kerry

Hi Kerry,
What a beautiful action photo of a Tachinid Fly. We are currently experiencing some technical difficulty, and we can post letters, but new photos are not appearing on the web. We have contacted our web host to see if he can correct the problem. We believe your Tachinid Fly is Adejeania vexatrix based on BugGuide. BugGuide also states that this Subfamily of Tachinids, Tachininae, parasitizes caterpillars.

Wasp Moth?
Hello Bugman:
I live in the Williamsport, Pennsylvania area. Here are some photos of a bug I have taken in the past few days. He is seen feeding on the goldenrod amongst many other bees and wasps. It is a little over an inch long. I can’t tell if it is a bee, wasp, moth or some combination. Any help would be appreciated.
Thanks,
Alex 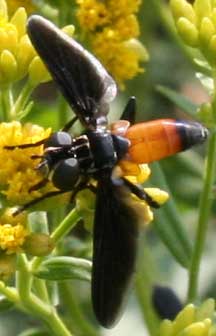 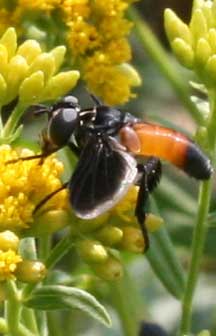 Hi Alex,
This beauty is a Feather Legged Fly, Trichopoda pennipes, one of the Tachinid Flies. According to BugGuide: “Adult female lays one to several eggs on a hemipteran host. The larvae hatch from the eggs and burrow directly into the bug’s body, though only one larva will survive within each host. The larva feeds on the host internally and eventually a large cream-colored maggot exits from body of the bug (which soon dies). The maggot pupates in a dark reddish-brown puparium in the soil and emerges as an adult about two weeks later. There are up to three generations a year depending on location, and larvae may overwinter in the bodies of overwintering hosts.” and “Often used as biological control of hemipteran pest species such as squash bugs, stink bugs, and plant bugs. May hover above squash plants in search of prey.” The black tipped abdomen is a signal that this is a female fly. 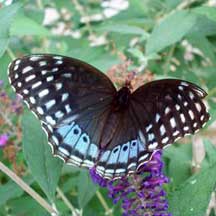 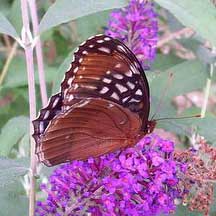 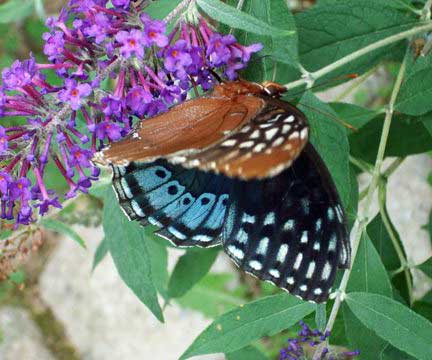 Our New Favorite Web Site: A Guide to Nabokov’s Butterflies and Moths

Pictures of Red velvet mite, Nigeria +Unknown black winged creature, Ifakara, Tanzania
Hi there, just found out what these bug are through your website. Thought you might like even more pictures… We’ve encountered them in Nigeria, please feel free to use them. I also attached picture of some black, flying create, found in ifakar valley, Tanzania. If you like I have more pictures of bugs from Africa. Best regards,
Robert Sirre 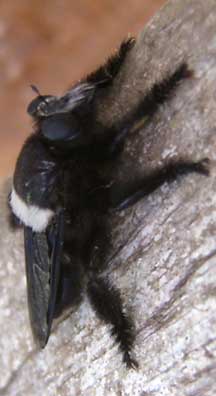 Hi Robert,
Since you have already identified your Velvet Mites, we have turned our attentions to your spectacular Robber Fly. We don’t know what species it is, but it is sure one impressive specimen. Robber Flies are in the family Asilidae. Robber Flies that resemble your specimen that live in North America prey on bees and wasps and other flying insects.

Update from Karl
February 18, 2011
Karl supplies some information
Re: Robber Fly from the Congo – February 11, 2011
Hi Daniel and David:
I believe that your spectacular Robber Fly belongs to the genus Hyperechia. Members of this genus mimic the large Carpenter Bees in the genus Xylocopa and the larvae feed on the bee larvae. It is thought that the Robber Fly disguise enables them to get close enough to lay their eggs inside the bee’s nesting burrows. There are a number of African species but based on a key to the genus Hyperechia (in Oldroyd 1970. Studies of African Asilidae (Diptera) i. Asilidae of the Congo basin) this one is likely H. floccose. I think this genus has appeared on WTB? at least once before, in a posting by Robert (danielj), Unknown Robber Fly from Tanzania, August 16, 2008. Robert’s Robber Fly looks like it could be H. marshalli, or perhaps H. bifasciata. Regards.  Karl

Any ideas? Found it outside my home in San Diego, CA.
ryan 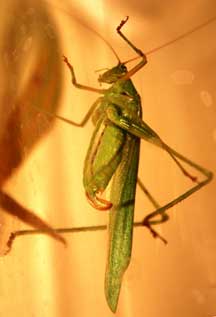 Hi Ryan,
This is a female Fork-Tailed Bush Katydid, Scudderia mexicana. They are attracted to our Los Angeles porch light right now, and we let the adults eat our rose buds because we enjoy the sounds they make. Charles Hogue, in Insects of the Los Angeles Basis wrote: “It song is also slightly different: males usually lisp (“zeek”) in a series of three or four a few seconds apart, although a shorter-pulsed sound (“zip”) is also made; ticking seems to be rare.”

Overkill: Sphinx Moth sprayed to death!!!
(08/15/2008) is it as dangerous as it looks?
Hi,
my little brother saw this bug upside down on our porch in Italy. He killed it with wasp spray, so it’s all wet, which might make it a little harder to recognize. I hope you can still get an idea of what it is… Thanks a lot!
Esther 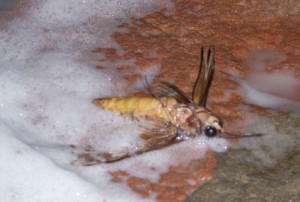 Hi Ester,
If ever the word “overkill” could be used regarding the use of pesticides, your photo ranks a close third after the global use of DDT and the statewide spraying of Malathion against the Med Fly in California in the 1980s. It appears your brother used an entire spray can of foaming pesticide to dispatch one harmless Sphinx Moth. This is textbook unnecessary carnage.