Strange Moth(?)
Fri, Dec 19, 2008 at 1:20 PM
Strange Moth(?)
i was with my friends having dinner in the garden at night when we spotted this rare moth-like bug, at first, we thought it was a little bird (it was as big as my hand with its wings spread) finally it got closer, an one of my friends went to have a closer look , it released some kinf of liquid from its abdomen, wich scared him a little bit, jaja, then it just flew away, i believe it is one of those night moths, altough i never saw one so big, an green like this one… any ideas?
Federico
Buenos Aires, Argentina 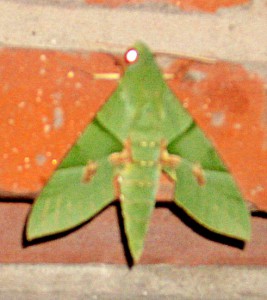 Hola Federico,
Most of the photos we receive of the Gaudy Sphinx, Eumorpha labruscae, come from Florida and the Caribbean, so we are happy to have your Argentine example from the southern portion of the species’ range.