Specific recluse
Wed, Nov 26, 2008 at 10:56 PM
Hi, I found this presumed reclusa spider in my house in Tucson, AZ. I know browns aren’t thought to be native here, but this is the fourth one I’ve found. This is the second one inside the house, and the other two were in the garage and back porch. Would this be a desert recluse, an arizona recluse, a brown recluse, or another species??
Thanks,
Clay
Tucson, Arizona 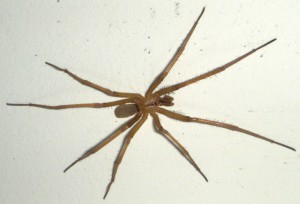 Hi Clay,
We too are unsure exactly which species of Recluse Spider in the genus Loxosceles you have photographed.  Exact identification may take a spider expert and may require actual examination of the specimen.  BugGuide posts a map with species distribution, and it seems Loxosceles apachea, Loxosceles arizonica, Loxosceles deserta, Loxosceles kaiba and Loxosceles sabina can all be found in Arizona, but there are no photographs identifying the differences between the species.  Both Loxosceles apachea and Loxosceles arizonica have ranges near the Tucson area. BugGuide also indicates of the Loxosceles:  “Brown spiders will not bite unless provoked. Little is known about the venom and bite of the lesser-known species of brown spiders. ‘Although there are suspected variations in virulence among the species, all Loxosceles spiders should be considered potentially capable of producing dermonecrosis to some extent.’ (Arachnids Submitted as Suspected Brown Recluse Spiders (Araneae: Sicariidae): Loxosceles Spiders Are Virtually Restricted to Their Known Distributions but Are Perceived to Exist Throughout the United States by Rick Vetter). Loxosceles venom is cytotoxic to humans. “

Update with Correction:  July 23, 2012
Thanks to a comment, we have corrected this posting.  This is actually a male Southern House Spider, Kukulcania hibernalis.  See BugGuide for additional information.