mexican honey wasp
Wed, Nov 26, 2008 at 1:56 PM
i am in southern mexico. these wasps make honey. they do not sting, i know this because my worker moved the hive with his bare hand and not one “ouch” or “chinga” as they say here.
wikipedia shows a different type, with yellow bands and say they sting. are these the same?
mark grossman
Oaxaca, Mexico 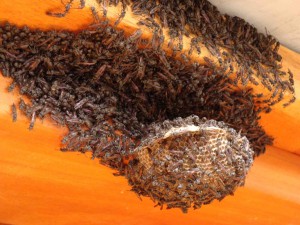 Hi Mark,
The information we have been able to locate online, including on the Texan Entomology page and on  BugGuide, identifies the Mexican Honey Wasp as Brachygastra mellifica.  According to BugGuide, the Mexican Honey Wasp is :  “Eusocial, that is, completely social, with worker and reproductive castes.  More than one queen per hive, and there are females present with ovaries intermediate in size between workers and queens. Form large colonies by swarming (coordinated groups of queens and workers). Store honey, but do not cap cells, as do bees. Nests are perennial, built in low trees, with as many as 50,000 cells. Remarks One of the very few insects other than bees to produce and store honey.”  It is possible this is a color variation, a subspecies, or a different species in the same genus. 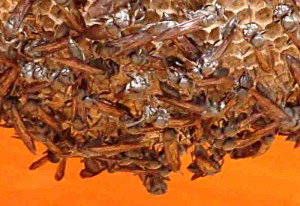 Paper Wasps and Nest in Australia