Twice-stabbed Ladybug?
Wed, Nov 19, 2008 at 10:21 AM
I believe this is a twice-stabbed ladybug. I did not see a photo on your ladybug page of this species. It was photographed in southern Utah.
Mieander
Southern Utah 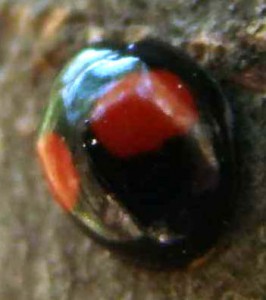 Hi Mieander,
While it is possible that this is a Twice-Stabbed Ladybird Beetle, Chilocorus stigma , there is another species in the genus that is found in your area that has larger spots.  According to BugGuide, Chilocorus cacti, is found in Arizona and New Mexico, but it looks like a better match.  The species is associated with Prickly Pear cactus.

Pupa and Larva of a Multicolored Asian ALady Beetle