Grandaddy Longlegs
Thu, Oct 30, 2008 at 6:23 AM
Dear Bug Guy, I know that this bug is probably very familiar to everyone, we called it the grandaddy long legs. There was a rumor growing up that if they could bite they would kill you, I never knew if that was true or not, but I never let one get close enough to bite. I saw this particular grandaddy on some wood we were putting away and noticed the little red things on it. Are they eggs, baby grandaddy’s or some other bug hitching a ride. I think their legs look like spark plug wires, I have never seen them this close. So, since we all know what we call these, what is their real name, and what are the little red things attached to it.
Thnaks so much,
Lisa Benningfield
Eastern Kentucky USA 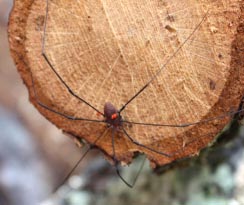 Hi Lisa,
This is a Harvestman in the order Opiliones.  They are often called Daddy Long Legs and they are harmless scavengers without venom.  The red creatures are Parasitic Mites in the genus Leptus.