big ant in line among smaller ants?
Sun, Oct 26, 2008 at 10:03 PM
Hi,
Every summer ants find their way into my house, and I’ve noticed for the past couple of years that there’s often a single larger/longer ant among the line of regular smaller ones. Always just one though. Who is this guy & what does he do? Usually the bigger ant is about 2-3 times the size of the others with an extra long abdomen, and moves slower; the one in the pictures from this year has a shorter/more proportional abdomen than others I’ve seen, moved faster, and behaved differently than other “big brother” ants in the past — instead of lumbering along in line with the others back and forth, this year’s walked for a bit then stayed in one spot, where the smaller ants congregated around it every so often.
In the past, the bigger ant hasn’t behaved any differently than the others, except for moving slower.
I couldn’t find any information on the internet about this (maybe because I wasn’t sure what to search for!) so any info would be appreciated. I just want to know why it’s so huge!
thanks!
michele.
los angeles, ca 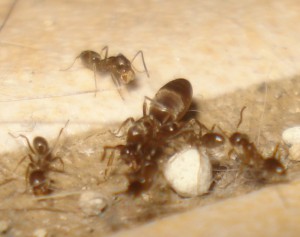 Hi Michele,
We have always called these Argentine Sugar Ants, but Charles Hogue calls them simply Argentine Ants in his book Insects of the Los Angeles Basin. We have been meaning to photograph our own home invasions, but never seem to have a camera ready when 100s of ants discover bits of food in the sink or the cat food. We can honestly say that no species of insect annoys us more than the Argentine Ant, Iridomyrmex humilis or Linepithema humile according to BugGuide, and may one day post some of our anecdotes about various funny home invasions in years past. Here is what Hogue writes about this species. “This is our most common ant, the little blackish species (its length is 1/8 in., or 3 mm) that invades our homes and yards in search of food and water. Abundant in urban areas, it develops to prodigious numbers, and single colonies may harbor thousands of workers. It often becomes particularly noxious at the onset of cool weather in the fall, when colonies converge and move to sheltered, warmer quarters under homes, and foraging columns begin to seek food indoors. The Argentine Ant is, as its name suggests, native to South America (Argentina and Brazil), and it is an undesirable alien in our country. It was apparently introduced into New Orleans before 1891 in coffee shipments from Brazil, and it has since spread rapidly over much of the United States. The species is one of the most presistent and troublesome of all our house-infesting ants. Argentine Ant workers seek out and feed on almost every type of food, although they are especially fond of sweets. Making themselves most objectionable, the ants invade the house through minute crevices and cracks — filing along baseboards, across sinks, and over walls and tables in endless trails. they also have another undesirable habit: by protecting and tending scale insects and aphids, worker ants foster these injurious garden pests. Shallow nests are made in the ground, often under rocks or wood; the galleries extend only to depths of 6 to 7 inches (15 to 18 cm) below the surface. there may be a number of queens in a single colony. The Argentine Ant is a highly competitive species and is quick to exterminate other species of ants, including natives, in territory that it has just invaded this ant has no sting; its bite is feeble but can be felt.” Many ants have a caste system with soldier ants. We are uncertain if the Argentine Ant has soldier ants. Perhaps a reader can provide that information. We suspect, as this is the onset of cooler weather, your larger ant may be a queen in search of a new home. We have noticed a similar situation with a single larger ant in our own home invasions. BugGuide supports that with this information: “Winged queens mate once with a winged male, after which they can continuously produce fertile eggs for as long as 10 years- until death. Unlike most ants, several productive queens of this species can share the same colony, with one or more leaving with some of the workers to form a new colony when it gets crowded (this is known as ‘budding’).” 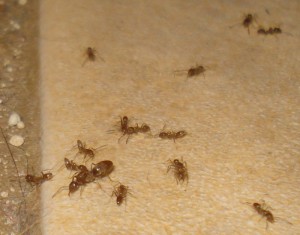 Ants in Florida, but what species??? Ghost Ants Confirmed