German Spider
Sat, Oct 25, 2008 at 3:56 PM
Hi, WTB!
I would say that I’m a great fan, but I know that you all probably know that whoever sends you photos has to at least have an interest in your site. So yeah, another of the hundred fans of the website. Great Job!
But onto my story:
I went to Germany this summer, and While I was at Neuschwanstein Castle in Bavaria, our group went below the castle to see a grotto. Inside, when everyone was looking at the pictures and sculptures put there by the king, yours truly was taking snapshots of the spiders living around the cave floor. This one in particular caught my eye. The light from the flash casts an awful glare in one photo, but the others I think show it pretty well. This spider was large in my mind at the time, but now that I seriously think about it, the arachnid couldn’t have been bigger than three inches stretched out.
Although, that’s why I’m asking experts: you.
Thank you much in advance, and I hope that you’ll be able to identify this critter!
Zachary Boyden
Bavaria, Germany 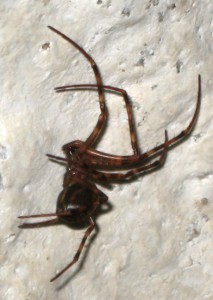 Hi Zachary,
Thanks for your kind letter.  We are not able to identify your spider species, nor the genus, but we are confident that this is a Cobweb Spider or Comb Footed Spider in the family Theridiidae.  Most spiders in this family are harmless, but it also includes the Widows and the notorious Australian Redback Spider.

2 Responses to Cobweb Spider in Germany