I Want My Wife Back, I Bugged Her with a bug
This has got to be the strangest jumping – stinger tailed – almost grass hopper I’ve ever seen. It does not have wings, has a long stinger looking thingie with something else protruding out of its hind end above the long stinger. Perhaps that is a suit case or is it just me wondering if my wife will ever return to our mountain Cabin in Utah with those things crawling around. I saw this critter crawling on the ground and naturally called my sweetie to come and have a look at it. When it jumped, she did too and hasn’t quit slapping her legs with her hands ever since for fear there are others crawling up her pant legs. I put it in a plastic cup and it climbed right up the side. I figure I’ll be rather famous for discovering this never before seen bug (at least by us) and could use the notoriety as I’m not too tallented in any other area. I’m not too good of a cook and I’m going to get pretty hungry up there if you don’t respond and tell her it is completely harmless. If you’ve never seen one either, just lie a little so I can get her to cook up some grub, and I don’t mean worms. Either way, she won’t believe me when I explain to her that it is quite tame and slow moving. There she goes, slapping at her legs again.
Wasatch Mountains, Oakley, Utah
Cabin Fever and Slap Happy, NOT! 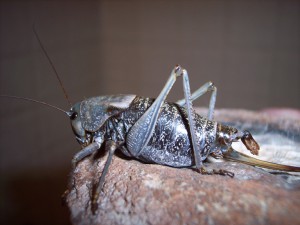 Dear Cabin Fever and Slap Happy, NOT!,
You should have learned in the third grade not to chase girls with spiders and snakes and Mormon Crickets, but we believe we can provide you with enough historical information to entice your wife back to your rustic cabin. Your Shield-Backed Katydid known as a Mormon Cricket, Anabrus simplex, though BugGuide indicates there are other members in the genus and exact identification may be difficult with the examination of the specimen. Legend has it that when the first Mormons arrived in Utah in 1848, they were saved from famine when seagulls suddenly appeared and ate the swarm of Mormon Crickets that was about to devour the first wheat crop. The Wikipedia page on the Mormon Cricket has plenty of good information, and you might also want to visit the Wikipedia page on the Miracle of the Gulls. With regards to the “stinger” you mentioned on your specimen, it is actually the ovipositor of the female Mormon Cricket. She uses the ovipositor to deposit her eggs deep in the soil. Since Wikipedia mentions that Native Americans consumed the Mormon Cricket, we will include it on our edible insect page and we expect that David Gracer, whose Sunrise Land Shrimp webiste is devoted to edible insects, will probably add a comment to this posting. Should you and your wife be living in your secluded cabin after a natural or man-made catastrophe (is there really a difference these days?), you may need to survive by eating the Mormon Crickets. Your wife may want to begin experimenting with the culinary possibilities soon. Should your wife not return to you, you may be eating these succulent morsels yourself. It appears as though the individual in your photo has been injured.

Update: David Gracer’s Input
Hi Daniel,
Congratulations on your overhaul. It must have been a lot of work. Regarding those crickets/katydids, this species might have been the most important kind of edible insect traditionally utilized by American Indians. Euro-American observers have written many pages describing the collection methods and preparation techniques concerning this species; nearly all of that documentation occurred in the mid 1800s. I’m told that the ones which have eaten cultivated alfalfa taste a good deal better than those which have consumed wild sagebrush, but thus far I haven’t had the opportunity to sample this species for myself. Best regards, Dave