Herd of bug on tree trunk
I found this herd of bugs at the base of a small tree in Houston, Texas on August 17, 2008. They remind me of praying mantis eggs, but they’re smaller. What are they and what are they doing? Are they hurting my tree? I don’t know if it’s important, but there was this small fly on a blade of grass next to them. Thank you
Sandra 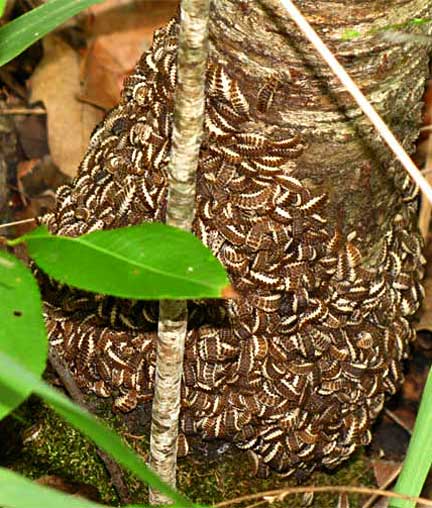 Hi Sandra,
The detail on your photo is not clear enough to make out individuals, but we suspect these may be Netwing Beetle Larvae, family Lycidae. Luckily, you sent a detail image as well which supports our theory. See this photo of an individual on BugGuide to see if it matches what you have. Netwing Beetle Larvae eat fungus and fungus often grows at the base of trees. If these are Netwing Beetle Larvae, they are not harming your tree, but the tree may already be compromised if fungus is growing. 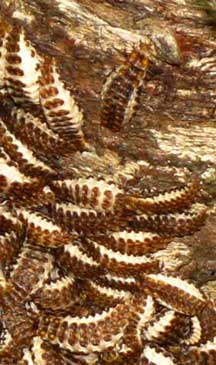 Comment: (08/17/2008)
Daniel:
I’m not sure, either. Probably one of the fungus beetles in the Erotylidae would be my guess. I have seen larvae of Gibbifer californicus in large numbers like this.
Eric