Great shots of Dragonfly
Hi,
I love your site!!! It is so interesting. I got some great shots of this Dragonfly, it stayed in this spot on my yucca plant for almost 3 hours & didn’t mind me getting in close for some shots. Do you know what type of Dragonfly this is? I live on Long Island in NY. I took the photos on Aug 5th 2008. Also do Dragonflys sting or bite us? Thanks for your help,
Vanessa 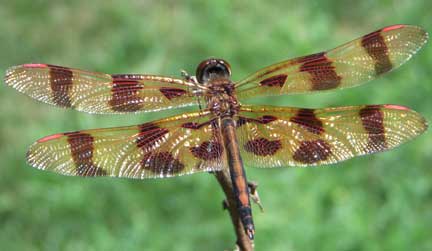 Hi Vanessa,
We believe this is a Twelve Spotted Skimmer, Libellula pulchella, though BugGuide does not illustrate any individuals with “broken” wing spots on the lower wings. Dragonflies do not sting nor bite despite the many superstitions indicating that they do. They are sometimes called Devil’s Darning Needles to accompany the superstition that they will sew closed the mouths of lying children.

Correction: (08/08/2008) “Twelve Spotted Skimmer” is actually a Halloween Pennant
Hi,
I believe the Twelve-Spotted Skimmer you have recently posted is actually a Halloween Pennant, Celithemis eponina. The yellow and brown coloration of the wings are pretty distinctive, as is the pattern of spots. The Twelve-Spotted Skimmer always has clear wings with three black spots on each, and white spots in between them on the males. Here’s a (year-old) picture: Hope this helps!
Susan 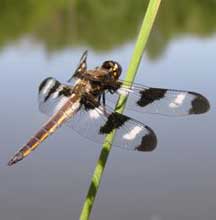 Another Correction (08/08/2008) mis-identified 12-spotted skimmer
As a daily visitor to your site and avid insect photographer (especially dragonflies), I wanted to let you know that the dragonfly posted yesterday is not a 12-spotted skimmer, but a Halloween Pennant.
Cheryl Rose

And yet another correction: (08/08/2008) Attention: dragonfly ID
This looks like a Halloween Pennant (Celithemis eponina). See: http://www.npwrc.usgs.gov/resource/distr/insects/dfly/ny/341.htm ; many other good photos online; or and excellent photo on your Dragonfly 2 page (Halloween Pennant Dragonfly with hitch-hiking Mites [12/11/2007]). Regards.
Karl

One Response to Halloween Pennant, NOT Twelve Spotted Skimmer