SC Spider
This spider has been growing in our window for about 9 weeks. We have tried to identify it but haven’t been successful. Here are a half a dozen small images that may help. We have the same as 10 MP if you want copies. These were taken in Beaufort, SC on August 3, 2008. Thanks for your reply
John 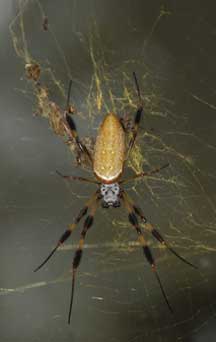 Hi John,
This is a female Nephila clavipes, also called a Golden Silk Spider or Banana Spider, though several unrelated spiders are also known as Banana Spiders. This species has marked sexual dimorphism, with the male spider being about 1/100 the size of the female. The silk of their webs is reported to be so strong that the spiders can snare small birds.