Stink Bug Eating Japanese Beetle
You’re site is terrific – I use it all the time. I’m always looking for ways to rid my yard of Japanese Beetles, so I thought that was wonderful: it looks like a Podisus (?) feasting on the beetle. Do they actually kill their prey or scavenge? I’ve never seen dead japanese beetles laying around like this except where I did the handiwork! It’s from Fort Wayne, Indiana. Thanks much!
Adam 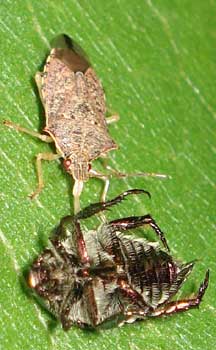 Hi Adam,
You have correctly identified your Spined Soldier Bug, a Predatory Stink Bug in the genus Podisus. Predatory Stink Bugs are true predators, and not scavengers. They need a liquid diet, so they only suck the fluids from the prey, leaving behind a drained dry husk. Gardeners plagued by invasive exotic Japanese Beetles would probably love to be able to purchase Spined Soldier Bugs, and we read on BugGuide that: “P. maculiventris is sold as a biological pest control, and appears to be the most common species in the southeastern United States.”