wasps
I just came across your website (thanks to Google) because I was trying to identify a wasp that we had never seen before. We live in southeastern Massachusetts and have just recently seen this wasp and, until today, had only seen one, but today we saw two. So I went to your website to try to identify it, but I couldn’t be absolutely sure of the markings, so I went outside to take some pictures of it. Boy, did I get a bonus!!! One of the wasps came home with a huge bug which I assume is some sort of cicada. Can you tell I’m not into insects?!? I was lucky enough to get a couple of pictures of the wasp with its prey as well as its nest. Hope you can use them on your site. If you can give me any information on these wasps, I would appreciate it. Thanks and keep up the good work on your website.
Susan Augustus
South Dartmouth, MA 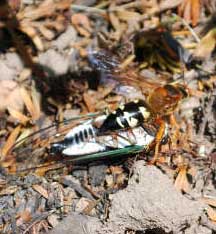 Hi Susan,
Your Cicada Killer Wasp is living up to its name. The larval wasps feed entirely on Cicadas that have been paralyzed by the female wasp. Male Cicada Killers, which do not sting, often act aggressively when defending their territory.

Cicada Killer preys upon Dogday Harvestfly in MANHATTAN!!!
Tagged with → food chain
What's That Bug? does not endorse extermination