Name our beetle in Japan?
Hi! We are living in Kawatana, Japan on Kyushu island. This beetle was on our front porch on the 4th of July. He was approximately 2 1/2 inches long. We’d love to identify him! We are seeing so many new insects since we’ve been here. I have used your site to identify ONE of the many types of centipedes we have here, the house centipede. Hopefully I can catch a few more on camera to send to you. They move quickly though! …Thanks for your help!
Rachel 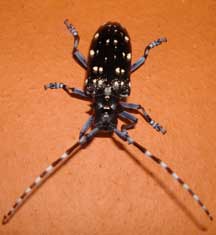 Hi Rachel,
We are very happy your report is coming to us from Japan and not from the U.S. This is an Asian Longhorned Beetle or Starry Sky Beetle, Anoplophora glabripennis. Now that you know that, you will be able to find much information online including Wikipedia which reports the Asian Longhorned Beetle, which is called the Sky Oxen in China: “is native to China and other areas of eastern Asia, where it causes widespread mortality of poplar ,willow ,elm , and maple trees.” The Amazing Insects site reports: “Asian longhorned beetles is widely distributed in China, and in Japan and Korea Once introduced into an area, people unintentionally spread the beetle by cutting or trimming an infested tree and moving the wood elsewhere. To date, the Asian longhorned beetle has been found at 26 scattered warehouse and residential sites in 14 States around the country, including Cincinnati, Ohio. The only Asian longhorned beetle infestations of living trees are at Brooklyn, NY, Amityville, NY, and three neighborhoods in the Chicago, IL area.” The Ohio Department of Natural Resources Forest Site reports: “The Asian Longhorned Beetle, also known as the Asian Cerambycid Beetle, was first discovered in the United States in 1996, when it was found attacking maple and horsechestnut trees in New York City. Recently, three Chicago area infestations have also been detected, heightening concern among forest health professionals about the threat posed by this non-native pest. This beetle, known by the scientific name Anoplophora glabripennis, is native to Japan, Korea, and southern China. In Ohio, the insect has been found associated with solid wood packing and crating materials, however, an infestation of living host trees has never been detected in the state. ” If our readership sees this beetle in the U.S. it should be reported to the local office of the US Department of Agriculture Animal and Plant Health Inspection Service or USDA APHIS.

Tan Bark Borer may have emerged from firewood

Tanbark Borer, we believe
Tagged with → Invasive Exotics
What's That Bug? does not endorse extermination