follow-up on bug question
Hi there –
I’m following up on a message (and photos) I sent on 6-22. I know you guys are extremely busy and can’t post online responses to every inquiry; but if you could just send me a quick reply as to what I’m dealing with, I sure would appreciate it. We’re desperate to make sure we’re not dealing with a harmful situation. By way of reminder, I’m attaching one of the photos that I sent before. Thanks. Sincerely,
Fred Watt
Owner, TC Concepts 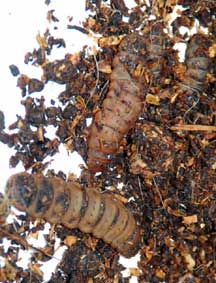 Hi Fred,
We are very happy you resent your images, though there might have been helpful information in your previous email that we are currently lacking. We are quite certain these are Window Fly Larvae, but you gave no indication where they were found. They are often found in compost piles and we currently have a healthy population in our own compost pile. They are also found in ground mulch. Hogue writes: “It is also found in defunct Honey Bee combs. There is no certainty that putrifying materials are actually the larva’s food. However, there is evidence that other fly larvae that are present in such decaying media, or Honey Bee larvae in hives, may be preyed upon by the Window Fly larvae. In spite of its waspish look and aggressiveness, the fly neither bites nor stings people.” We are guessing you found your specimens in compost or mulch by the look of your photo, so we would conclude that the larvae are harmless, or more accurately, beneficial if they are devouring other fly maggots in the decaying organic material. If, on the other hand, you found them in your bee hives, they could be a cause of concern.

Update: (06/28/2008) follow-up on bug question
Hi Daniel
Thank you for your response. However, I’m really not convinced these are fly larvae and it may be like you said, that you were missing some valuable information from my original message. Anyway, for starters, we don’t have bee hives, so that’s not an issue. These larvae are in the rabbit manure that is under our rabbit cages in a covered barn. They are there in the thousands. I cannot find anything (online or elsewhere) that looks like these and they don’t look anything like the fly larvae I have seen. The most recent solo picture that I sent does not give any kind of perspective, so I’m here attaching a photo of them on a regular sized paper plate. As you can see, these guys are fairly large, running up to 1-1/2″ or so. Because you said my original message may have had more valuable information, I am here quoting from that message: “It appears to be some kind of beetle larvae . . . We’ve considered (and rejected) mealworms. These guys are just too dark and they don’t have the rounded bodies. They’re bodies are flattish. They DO seem to travel on their backs when on the surface, so I considered the larvae of the Green June Beetle, which we definitely get around here on an annual basis. But they don’t seem to look like any of the pictures I’ve seen of them either. Wrong color; wrong shape. Dung beetle was also looked at (duh) and ruled out for some reason that I can’t remember now. I haven’t ruled out Fiery searchers, but I can’t seem to find a good photo of that larvae that looks enough like these to be convinced. They don’t seem to have any legs to speak of; just feelers that you only see when they’re on their backs. But I may just be missing them. They are too dark for typical white grubs and they don’t curl up like typical white grubs either. They don’t wander on to the floors; they seem to like it right where they are in and among the waste.”
I guess the bottom line is that if these are flies, they’re going to be awfully big flies and we have a real problem, bee hives or no bee hives. Are you sure about the window fly identification? If so, can you point me to information that would help me get rid of them. Thanks. Sincerely,
Fred Watt 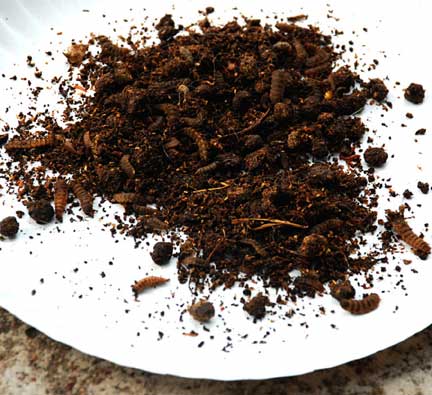 Hi again Fred,
Thanks for the additional information and the new photo. Hogue describes the larvae of the Window Fly or Black Soldier Fly, Hermetia illucens, this way: “The larva is robust, tapered in outline, and somewhat flattened, with a tough brown leathery skin covered with numerous short bristles.” We are sticking to our guns on this one, though we have been proven wrong numerous times in the past. We will solicit Eric Eaton’s opinion on this as well.

Confirmation from Eric Eaton
Daniel:
It appears you are on the mark with the identification of the larvae in the rabbit dung. They are larvae of the black soldier fly, Hermetia illucens. Now to address Fred’s questions. First, the larvae feed on decaying matter in many different situations, not just bee hives. In fact, that is probably one place they are not found with any regularity. Manure of any kind seems to be the preferred larval food, and they are often employed in composting pig manure. They are even sold as bait and “feeder” animals in pet shops under the names “Phoenix worms” and “soldier worms.” Lastly, the larvae of most insects are substantially larger than the adults. Much fat is burned during the transformation into the pupal stage, and further energy is expended during the reorganization of the cellular structure into the adult insect. So, size alone means virtually nothing. Congratulations, Daniel, on making a pretty tough identification!
Eric

Hi Daniel
Thanks, guys. Yes, once I saw a photo of the larvae, I too was convinced. I think it was the “Window Fly” label that threw me off before. Nothing I found under that label looked anything like these. But the photos I’ve found for Hermetia illucens are indeed exactly identical. Now I have to decide if there’s a benefit that outweighs the potential problem (?) of swarms of black soldier flies. I literally have tens of thousands if not millions of these. Want some? 🙂 Sincerely
, Fred Watt

Rat-Tailed Maggot or other Fly larva