HUGE swarm of…
Mr. Bugman,
I was out about an hour before dusk photographing a dragonfly when I stirred up what I thought was a huge swarm of mosquitoes especially considering the hour. However upon closer inspection ( What possessed me to want to get CLOSER to such a large swarm…I don’t know) anyways, they appear to be some form of wasp. They behave just like mosquitoes though, in that, I couldn’t locate any central “nest” they were simply perched on all the branches and leaves of the plants, when stirred up it just looks like a dense swarm of mosquitoes. I’m not sure if the photo is clear enough to ID from but that’s as close as I could get without stirring them up. They are approximately 1/2″ to 3/4″ long. By the way, by a HUGE swarm, I mean they were collected on the plants like in the photo covering an area about 75ft by 10ft. I found these in Southeast Alabama, almost to the Florida Border. Thanks in advance,
Clayton 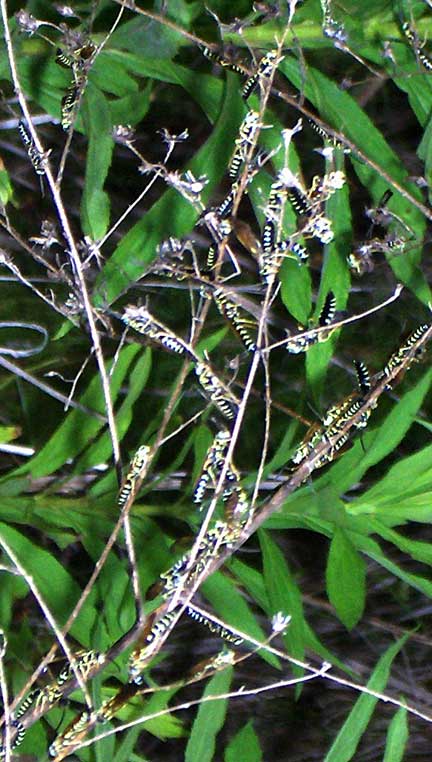 Hi Clayton,
This is a aggregation of male Tiphiid Wasps, probably the Five Banded Tiphiid, Myzinum quinquecinctum. Over the years, we have received two other reports of this behavior with photos. The nonstinging male wasps form “bachelor parties” when bedding down for the night, though the reason is unclear.

5 Responses to Aggregation of Tiphiid Wasps