Solpugid gives you his Thanks!
Just wanted to let you know I am so very thankful for your site. As a newly single mom of 3 kids I have now taken over the BUG duties. My kitten found this guy in the house tonight, and not wanting to kill something I didn’t know about I caught it and took it outside where I took this picture. Thank goodness I found your site and now know what this solpugid is. I am relieved to know I didn’t harm a great hunter, no matter how ugly it is! He will now help get rid of some more of the undesirables in the neighborhood! LOL! Like a personal bodyguard against the bad bugs! He could intimidate me!! Thanks again!
Jennie
Mesa Arizona 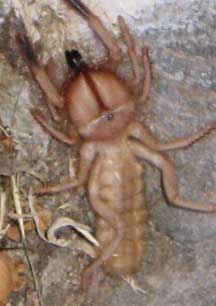 Hi Jennie,
We must say that we qre quite impressed you possessed the wherewithall to research the identity of your Solpugid after discovering it in your home, but before doing it harm. It is quite intimidating looking and most people would kill first and question later. We are so happy we could be of service to you and your Solpugid, also known as a Sun Spider or Wind Scorpion. As you have indicated, they are fierce and fearless hunters, but thankfully, we humans, due to our size, are not on their menu. Woe the day that big government harnesses the gram per gram hunting potential of Solpugids and unleashes it as a weapon of mass destruction.