A few questions regarding a caterpillar
Hi Bugman,
I came across your site when I was trying to figure out what monstrous spider was creeping on my shower ceiling last night. After finding out that you’re THE go-to people for identifying photos of bugs, I thought I’d throw a few your way. We live in southern California and this is a caterpillar that my son found on our fence a few weeks ago, that was starting to make its chrysalis. The next day the chrysalis was fully formed and I realized that there were several other chrysalises along that same fence. I guess that’s the hot spot for them. Anyway, when I looked at some of the other ones, I discovered that one was being invaded by other bugs. Attached are the picture of the caterpillar and of the invaded chrysalis. My questions for you are: Is this a fritillary caterpillar (the only one on your site that closely resembles what I have)? What will the butterfly look like when it comes out? It’s already been 3 weeks – how much longer before the butterfly emerges? Are the bugs on the chrysalis the braconid wasp and were they in the caterpillar before it started the metamorphosis? OK, those are all my questions. Thank you for putting up a wonderfully informative website! My 3.5 year-old son and I have been looking at many of your photos today.
Gina 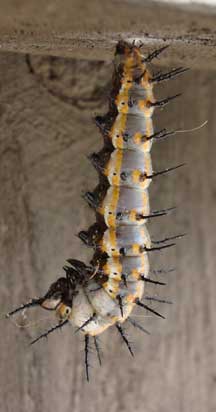 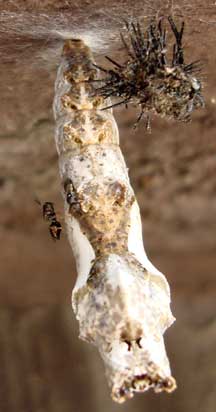 Hi Gina,
Calling us the “go to people” is quite a compliment. This are photos of stages of metamorphosis of the Gulf Fritillary, Agraulis vanillae, a pretty orange butterfly with metallic markings that feeds on passion vine. The adult butterflies should be emerging soon if they have not been parasitized. The Braconid parasitization may have occured at the caterpillar stage or the chrysalis stage.

Correction: (05/18/2008)
Hi, Daniel: My only itty-bitty correction today is that the wasps on the gulf fritillary chrysalis are not braconids. They are some kind of chalcid wasp instead. Chalcids comprise several entire families of insects, so without a microscope and the specimens, no one is likely to be able to say which wasps, exactly, to genus or species. Chalcid larvae typically develop within the caterpillar, but emerge from the chrysalis. All the other recent posts are dead on, including the big African assassin bug. Well done (insert applause here):-)
Eric Eaton

Flesh Fly gives viviparous birth to Maggots while in the death throes of an Ambush Bug!!!
Tagged with → food chain