Assassin Bug follow up
A couple of days ago I sent a photo of an Assassin Bug, I think its in the Nymph stage. I’m keeping a close eye on the plant that has the Assassins on it. I went to the pet shop to buy some small crickets to stage an assassination. When I went to the plant, one of the nymphs had just taken another unknown bug. I took several pictures of the carnage. After a while I took off the back jumping legs of a small cricket, just pinch the upper part of the jumper and it falls off. I fed the prey to the aggressive hunter who took it immediately. While photographing the action, another Nymph joined in. It was quite the tug of war. They seemed to settle down after a few minutes and proceeded in what would be one of my worst nightmares. I hope you can tell me what kind of Assassin this is and what it may turn into. I have attached three new photos, 1 is what you consider carnage of the predators natural prey. 2 is a staged assassination of a store bought cricket. 3 A colossal battle of two creatures that may or may not be from another planet.Thanks
Danny 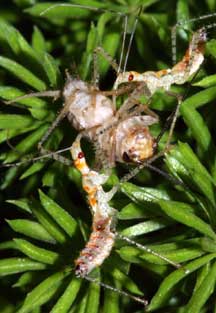 Hi Danny,
Thanks for sending your exciting letter and wonderful photographs. We pondered the merits of the natural predation versus the feeding intervention, and opted for the sensationalism of the “tug of war” between two Pselliopus Assassin Bug Nymphs and the store bought Cricket. Assassin Bugs in this genus are known as Sycamore Assassin Bugs.

Flesh Fly gives viviparous birth to Maggots while in the death throes of an Ambush Bug!!!
Tagged with → food chain