Spider photos
Attached are photos of a spider a worker at a local grocery store found in a bunch of organic bananas. He said the sider was inside a egg pouch with the spiderlings. He froze and destroyed the egg sac after he removed the adult. Is this a banana spider? 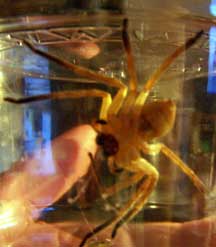 Whitetail Spider, or not???

What Nested in the Pine Needles???