Lesson Learned in Florida
Last spring, I tried in vain to keep eight, young, butterfly plants alive in my modest flower garden. “How wonderful it would be to attract beautiful butterflies”, I thought. To my dismay, fat, yellow, aphids appeared by the dozens on each little plant. They were herded by fire ants from a nearby nest. For weeks, I squished aphids, always marveling at the protectiveness of the ants and sheer numbers of aphids they managed. While walking in the cattle pasture one day, I saw an entire plant covered with aphids. I was horrified that the source of these bugs was a weed that had appeared in our pastures in record abundance, presumably due to a long drought experienced here in northern Florida. Since we raise natural beef cattle, I picked many of these weeds by hand out of our pastures, but to my dismay, as I picked them, their seed pods were already releasing fluffy seeds for next year. This spring, the population of these plants was even higher than last year! So, I began picking these plants early this year, well before they could complete their seed pods. I didn’t get far before I noticed a caterpillar on one of the plants. It was a monarch! (See pictures below). I looked at my hands and noticed the milky substance from the few plants I had already picked. How ironic that I waged a (thankfully) unsuccessful war against what turned out to be a milkweed native to Florida because I wanted to save a few measly butterfly plants! How completely human of me. Little did I know that I had several hundred or more plants in the pastures that were the perfect diet for the very creature I was seeking to attract. I have learned my lesson and sworn off meddling with milkweeds or anything else unless I know for certain that it is a threat to native wildlife.
Alicia 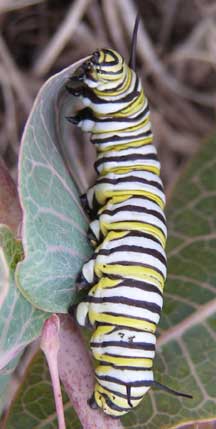 Hi Alicia,
Thank you for writing one of the best letters we have received in a long time. We are excited to post your photo of a Monarch Caterpillar.

Glad you enjoyed it! I’m researching when these caterpillars will complete their pupa stage and emerge as butterflies. We plan to rotate the cattle in our other pastures until then to keep the monarchs safe. We already made changes in our livestock management to accommodate two other threatened species: gopher tortoises and Sherman fox squirrels. Gratefully,
Alicia