Is this eating my squash?
The squash in my garden were not looking too good, then I discovered a orange and black spotted bugs that looked kind of like Ladybirds. I told one of the ladies at the nursery about my squash getting eaten and about the orange and black spotted bug, and she confirmed they were Ladybugs and not to put insecticide on the plants but let the good bugs do the work. HA!! Now whatever is eating my squash was going to get it. However my squash keep looking worse and worse even with the appearance of more and more Ladybird Bugs. I find these bugs on healthy leaves, then check back a few hours later and the leaves are all torn up. Could they be what is eating my squash!?! Are these wolves in sheep’s clothing?!? HELP!!!
Bard Letsinger
Victoria,Texas (110 miles south of Houston along the coast) 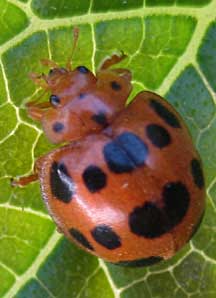 Hi Bard,
You are correct, this is a Squash Ladybird Beetle, Epilachna borealis. This species and its close relative, the Mexican Bean Beetle, Epilachna varivestis, are rarities among the Ladybird Beetles which are otherwise carniverous. You can view other images of BugGuide, which indicates the range of this species as “Scattered distribution over the eastern half of th U.S. south of Massachusetts.”

Pupa of a Lady Beetle