a bug of course
Hi.
I was picking up my children’s playroom, and from the edge of the carpet – crammed between the wall & carpet – I grabbed what i thought was a clump of lint, thread, something like that. To my horror it was not lint! What is this thing? It’s “shell” is hard, and textured. On each end it has what could be mistaken for eyes; however, it pulls it’s head inside it’s “shell” to hide; along with pulling its antennae in, and pulls it’s legs all in tightly to it’s sides. Then it “plays dead”, i guess. It’s moving all over the place now (well, inside the little container it’s in), but as soon as i pick up the container, it does that all over again, and goes dormant for quite a while before coming back “out” again. We live in SAN DIEGO COUNTY, CA. Our house is at the bottom of several small hills. We’ve had dozens of weird insects/bugs; and spiders have become the norm. We’ve also had lots of snakes, including rattlers. (don’t know if that’s relevant or not) Thanks,
Joanne
San Diego 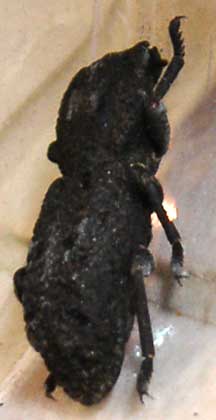