Cool Bug
If you know anything about bugs in Australia we would love to learn what type of critter we have here. At first I thought it was a dead leaf which had blown off of a clump of eucalyptus branches I had just cut for my possums…. until I saw it crawling up the spare possum box on the front verandah! NO idea what it is but I kept a safe distance as the scorpion-style tail looked somewhat threatening! Thanks
Tom 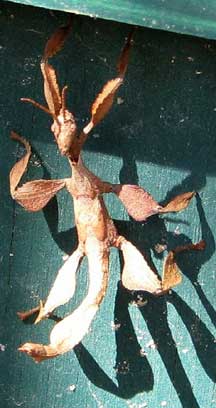 Hi Tom,
This is some species of Phasmid, commonly called Walkingsticks, Stick Insects, or in the case of your specimen, probably a Leaf Insect. We have not had any luck identifying the species. Perhaps our loyal reader Grev, who often comes to our rescue with unknown Australian specimens, will have better luck scouring the internet than we have had. Leaf Insects do not have stingers, and the posture of the tail end is display only.

Male Giant Water Bug Tends to eggs as female eats
Tagged with → Edible Insects: Tasty Morsels • WTB? Down Under
What's That Bug? does not endorse extermination