Mojave Desert Insect Identification
Hi,
I’ve attached several photos of an insect we found near Davis Dam which is in Bullhead City, Arizona. There were between 50 and 100 of them sitting in a localized area crawling to the top of local wild flowers, mostly on the Phacelia Distans. Also known as Blue Phacelia, Wild Heliotrope ~ Scorpionweed. At first I thought they were Tarantula Hawks, but their color and shape was wrong. They look similar to your Spider Wasp photos. Their sizes varied between 1 inch and nearly 3 inches for the bigger of the group. Some appeared to be stuck together end to end (mating I guess.) They were pretty aggressive. They would follow you on the ground trying to get onto your boot and would actively follow your position with their little head. However, most refused to fly thankfully. These insects stayed in this place for at least the past two days. I was able to get within 6 inches of them with the camera without disturbing them. We’re interested to know how dangerous they are beyond someone simply being allergic and doing the curly shuffle in a circle on the ground in anaphylactic shock. Feel free to use the photos for whatever you like. The photos were taken on 3/22/2008. Thanks,
Steven Boehm
Project Manager — Davis Dam 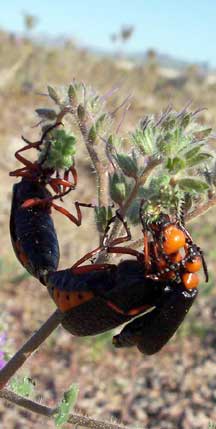 Hi Steven,
These are Master Blister Beetles, Lytta magister. They are known as Blister Beetles since they can secrete a substance from between their leg joints that will cause an irritating reaction in humans.