Assassin Bug from the Philippines

I need info on Vesbius pupureus, is it harmful?
Dear Bugman,
Hi, I wrote to you several times before about this red bug (Vesbius purpureus) I found crawling in my room. I still can’t find any information about it on the net. Last night I spotted this guy crawling near a crack (where it lives). It had babies a couple of weeks ago and they scooted back into the crack whenever they saw me coming. I live in a wooded area and there are ants in my room. A few week ago, red ants invaded my room and I saw the bug family happily sitting by an ant trail, sticking out their long proboscis (freaking me out) and impaling and sucking ants. Do these bugs drink human blood? I’m grateful to them for ending my ant problem but seeing them eat is scary!! Where do they get their red coloring from? Do they actually have a "family unit"? Thank you!!
Martin 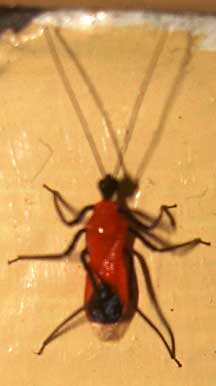 Where in the world are you???

Dear Daniel,
I’m from the philippines! Thanks very much!

Hi Martin,
First we want to apologize for not responding to your previous requests, but it is actually a physical impossibility for us to respond to every letter. Second, we are very curious how you got a scientific name without any additional information. It is also noteworthy that you neglected to include a letter “r” in the species name of Vesbius purpupeus. Your insect is most definitely an Assassin Bug in the family Reduviidae, and the feeding habits support that. We did a google search of “Reduviidae”, “Philippines” and “Vesbius” but the only thing we could locate was a stamp issued in 1988. We also located a mention of the genus Vesbius in an Integrated Pest Management report that discussed it as a possible biological control for potential insect pests. We then found a website on the biodiversity of Indian Assassin Bugs, which indicates the genus Vesbius is in the subfamily Harpactorinae. Most relevent to your questions, perhaps, was a site that discussed Hemipterans that prey on insects that infest stored products, and this list included Vesbius purpureus. We found more images here. There were many Chinese websites that mention Vesbius purpureus. Assassin Bugs do have piercing mouth parts that they use on prey, and they will bite people if provoked, but few species actually feed off human blood. The Cone-Nosed Bugs in the genus Triatoma are an exception. The communal behavior you describe is not something normally associated with Assassin Bugs, though we just posted an image of a pack of Australian Assassin bugs attacking a Millipede, so communal behavior is a possibility. In closing, we do not believe your Assassin Bugs pose a threat to you, and if they are eating ants, we say “Let them be.” 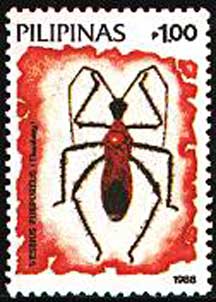 Dear Daniel,
I knew the scientific name from my gradeschool stamp club. I had the stamp with the insect on it. Yes, I will leave them be. I have NO ants left in my room and sadly, I have not seen any of these cute little bugs. Thanks,
Martin

Common Assassin Bug from Australia
Tagged with → WTB? Down Under
What's That Bug? does not endorse extermination


3 Responses to Assassin Bug from the Philippines