From the monthly archives: "December 2007"

Help! What’s this bug?
I’ve searched the spider section of your website to identify this spider that I came face to thorax with this afternoon. She (or he) has made a comfortably large web among the christmas lights hung on our palm tree. We live in South Florida only about 30 feet from a giant nature preserve, so bugs & critters are not uncommon, but this guys made the hair on my neck stand up and I’ll admit I screamed! I watched her for a while and witnessed her having a few meals… I did consider (kindly) making her move elsewhere because I have toddler who likes playing in our yard by that tree. Can you tell me more about this spider? My guess is that it’s a Nephila Claripes as you identified for someone else. What I really want to know is if this is a harmless spider or one of the more aggressive variety. We’ll have to get pretty close to her in only a few weeks when we take our lights down! Thanks in advance for your help!
Brook, Delray Beach FL 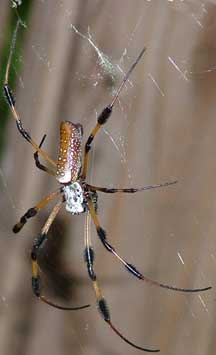 Hi Brook
Congratulations on properly identifying your Golden Silk Spider, Nephila clavipes. This is not an aggressive species, but many spiders are capable of biting people if they are provoked. The venom is not considered dangerous. We do not believe your spider poses any significant threat and she will rarely, if ever, stray from her web. By the way, one of the distinguishing differences between spiders and insects, in addition to spiders having 8 legs and insects having 6, is that the head and thorax of the spider is fused into the cephalothorax, while the head and thorax of insects are distinct.

A pair of Banana Spiders cohabitate

Emerging Luna Moth
Hi Lisa Anne and Daniel.
I see you love Luna Moths as much as I do. Here is an emerging male I was fortunate enough to photograph. He climbed the stick, expanded his wings and was released into the WI woods. Peace,
Dwaine 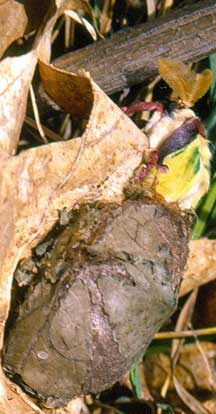 Reintroduction of Luna Moths in Ohio

Mating Mantids from New Zealand: Natural Selection at its finest!!! …

Mantis awesome foursome
Hi
I just found your site, when trying to find out how to recognise whether a mantis egg case had hatched or not. How do you tell? Anyway, I see that you accept bug photos, so thought you may like this one for your site. The female has three males “in close attendance” – they stayed like this on a flat leaf parsley plant for ages. I suspect the mating was successful because we had a lot of small mantis offspring in our garden the next season. I did not want to disturb them, so am not sure if they are the New Zealand native variety or the South African variety that arrived in NZ about 1978. I suspect it is our own native, judging by the egg cases in the garden, and I am sure the ones I have seen have the blue spot on the legs (missing in the SA variety). I think you can see it on one of the males in the picture. Best wishes
John
AOTEAROA NEW ZEALAND

Wow John,
What an awesome image. We really like the education we receive from our international readership. We had no idea that the native New Zealand Mantis, Orthodera novaezealandiae, was being threathened by the imported South African species, Miomantis caffra. We found a link that has some information. We agree that the distinctive blue spot on the inner surface of the male’s foreleg identifies your randy group as the New Zealand Mantis.

… and Survival of the Fittest as the Greatest Detriment to Species Diversification
Hi Daniel
Thanks for the response and post. Yes, our native wildlife of all kinds is under attack from visitors from offshore, whether introduced deliberately or by accident. Immigration from Europe only began in earnest in the mid 19thC, and all sorts of beasties came then, to find a country where the indigenous life was ill-equipped to cope. Introductions have intensified in recent decades with air travel an increased inward migration from many parts of the world. We are currently having major problems trying to eradicate various mosquitos that have arrived in recent years – these bugs are capable of carrying all sorts of nasty diseases that don’t exist here – yet. Of course none of them have natural enemies in this country so they flourish. Asian paper wasps are another pest, and other wasps that thrive on beech forest honey dew have caused depletion of native birds as well as native insects, not to mention making many popular places unsuitable for picnics or tramping (hiking or bush walking). Congratulations on your site. This may be a useful link for you: http://www.landcareresearch.co.nz/
John

Hi John,
Thanks so much for your touching update. We are constantly having to justify our own disdain for travel as well as having to explain why we have chosen not to visit each and every one of the wonderful places in the world there are to see. We are appalled at the number of environmentally concerned individuals who want to travel to pristine endangered habitats to see the wildlife without realizing that their visit can do grave damage. People need to just “Stay Home” and preserve what they can.

Comment: In Defense of Ecotourism from Eric Eaton (12/31/2007)
Hi, Daniel:
I do have to politely disagree that ecotourism is always a bad thing. There is no substitute for international travel to gain a full appreciation of the natural and cultural history of other places on the planet. One has to travel responsibly, of course, and obey the rules and wishes of the host country. Hopefully, those who travel abroad bring back many valuable experiences that they need to share with others. Unrestricted trade in international commodities really IS a bad thing! Few protocols are in place to prevent infiltration by hitchhiking flora, fauna, and pathogens, and enforcement of those few existing regulations is even more pathetic. That is how most invasive species enter countries. Not with human travelers, but with imported goods.
Eric

Walking stick ID please
Hello,
I was wondering what type of walking stick this may be. It does not look like the typical two-striped ones I usually see here in Vero Beach, FL. Thanks!
Scott Walker
Vero Beach, Fl 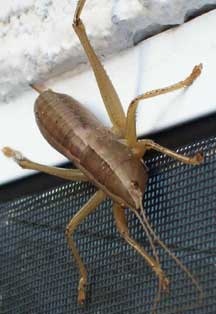 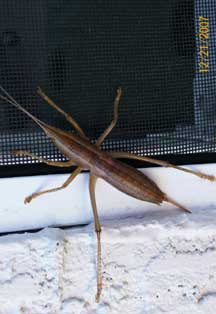 Hi Scott,
We believe this is an immature female Neoconocephalus triops, Broad-tipped Conehead, a type of Katydid. There are many photos of adults on BugGuide. We are requesting assistance from Eric Eaton. Eric quickly responded, and we were in the ballpark, but with the wrong genus. Here is Eric’s response: “Hi: That’s much better with the image:-) It is an adult female conehead in the genus Belocephalus, something unique to Florida I imagine. Eric ” There are some images on BugGuide.

Update: (07/03/2008) Katydid IDs from Piotr Naskrecki
Hi,
I have been looking at the page with unidentified katydids (Katydids 2), and thought I could help with some ID’s. From top to bottom they are: Florida conehead – Belocephalus (most likely B. sabalis)

Can you identify this bug for me
I was in Bisbee, AZ for a week and saw this bug three different times. It was about, I want to say it was about three inches long. All I know is that is looked so big I had to take a photo of it. Thanks for any information you can provide.
Mary Jane Bank 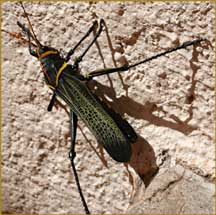 Weird things in my yard
I posted these to my facebook account months ago and none of my friends have any idea what these things are. They disappeared as mysteriously as they appeared.
Gaspare Maggio 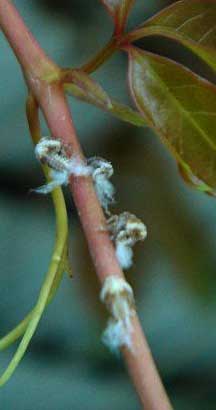