Please help identify
Lisa Anne and Daniel,
We recently took a canoe trip on Silver River in the Ocala National Forest in Florida. We found this in our canoe the next morning at the hotel in Ocala. Some of the photos of gonatista pronotum look like it, some other photos of gonatista grisea resemble it. Can you please help us identify it? Many thanks,
Jeannene and Scott Kennedy 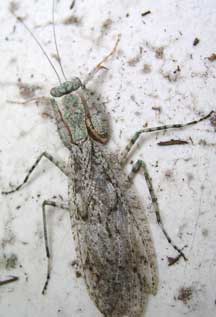 Hi Jeannene and Scott,
The pronotum is part of the thorax on an insect. Your letter seems to imply that there is a species named Gonatista pronotum, and to the best of our knowledge, this is not true. We feel this is a male Grizzled Mantis, Gonatista grisea, as evidenced by an image on BugGuide. BugGuide also states that this species, which is also known as the Lichen Mimic Mantid is: “Mottled gray, green and brown and overall body shape is broad and flattened. Pronotum not narrowed ahead of point where frong [sic] legs attached. Female has short wings, abdomen lobed on side. In male, wings cover abdomen at rest.”