Moth?
What’s That Bug,
Here is an image of an insect I caught a month ago in my mom’s kitchen, crawling it’s way up the wall. It made it’s cocoon in a small make-up box I kept it in and hatched some time yesterday. A friend of mine heard it buzzing around rapidly and started screaming, so I ran to my room, where I was keeping it, and was overwhelmed by the sight of the first insect I’ve kept…that didn’t die two days later. I know it’s a moth, but what kind it is, I don’t know. That’s why I’m asking you. What is it? After a long time of searching, I have only found that it looks mostly like the Fig Sphinx and the Ficus Sphinx. Thank you,
Michaela C.
Florida 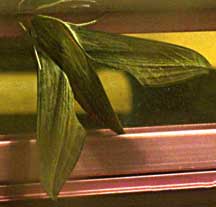 Hi Michaela,
Though the image quality is not the best, we believe this is another species of Sphinx Moth, the Tersa Sphinx, Xylophanes tersa.

NOT Yam Hawkmoth from India