PLEASE IDENTIFY
Hi …
Attached is a photo I took of some beetles around the first of October. There were literally hundreds of them mating on that particular day. I haven’t seen them before and the next day they were gone. The location is in Southern Ontario, Canada (Toronto) and the landscape is close to a river and in one of the last remaining Oak Savanahs in Canada. Our concern is that in Western Canada there is an infestation of Long Horned Asian beetles which has been killing many trees. We hope these are not related. Please identify and reply at your earliest convenience. Thanks in advance,
John Morrow 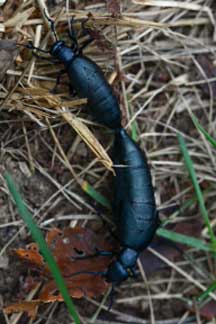 Hi John,
These are mating Oil Beetles or Short Winged Blister Beetles in the genus Meloe. There is some very interesting information found on BugGuide regarding these beetles including this by Jim McClarin: “Meloe life cycle can be very complex In at least one Meloe species, the larvae climb to the top of a grass or weed stalk as a group, clump together in the shape of a female solitary ground bee, exude a scent that is the same as, or closely resembles, the pheromones of the female bee, and wait for a male ground bee to come along. When he does, he tries to mate with the clump of larvae, whereupon they individually clamp onto his hairs. He then flies away, finds and mates with one or several real female bees, and the larvae transfer to the female(s). Each impregnated female bee then flies off and builds one to several nests in burrows she digs in the soil, and the larvae transfer again to the new nests. The female bee stocks these nests with honey and pollen for her own young, but the hungry blister beetle young are there to gobble up the provisions. They eventually pupate and finally emerge as adult flightless beetles. Brothers and sisters find each other and mate, produce eggs and the hatchlings start the process all over. Then there are male beetles from a couple other beetle families who seek out blister beetles, climb onto them and lick off the cantharidin the blister beetles exude. Not only have these other beetles developed a resistance to the cantharidin, they use the blistering agent to impress a female of their own species who then mates with them, whereupon most of the cantharidin is transfered to the female in the form of a sperm packet. The eggs the female subsequently lays are coated with cantharidin to protect them from being eaten before they hatch. Then there are the bipedal primates who use cantharidin from blister beetles to manufacture the notorious date rape drug, Spanish Fly… “