What bug do I have?
I found this bug outside of my house on my porch right after a rain storm on 10/4/07. I live in New Mexico at about 5500ft on the plains west of the Sandia Mountains in central New Mexico. The body is like a beetle, but it has pinchers like a scorpion. The tail is about 2 inches long, and appears to act like an antenna of sorts but does not appear to be a stinger. It gives off an awful and irritant smell that hurts the eyes and throat. This thing is freaky and looks like a cross breed of a scorpion and a beetle. The picture does not illustrate its size. It is about 3 inches long. Please let us know, if you are familiar with what it is.
Zachary Grant 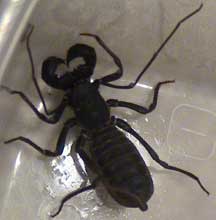 Hi Zachary,
This Whipscorpion is commonly called a Vinegarone, or Grampus in the South. It is a harmless relative of scorpions and it gets the name Vinegarone because of the vinegar scented acid they release from a gland near the tail. They are shy nocturnal hunters that are seldom encountered.

One Response to Giant Vinegarone