Poplar Hawkmoth?
Bugman,
I believe this is a Poplar Hawkmoth; photographed on a wall outside our home in Silver City, NM, on August 6, 2007. The elevation here is 6,250 feet or 1,905 meters. Best regards,
David R. Furnas 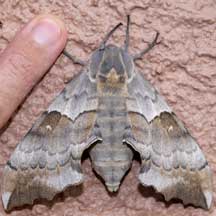 Confirmation: (08/11/2007)
Daniel,
It is occidentalis (female). Note the well formed (distinct) inner line in the basal area. In modesta, there is a very diffuse corresponding marking. I would like to use the image. Can you ask photographer to contact me?? Thanks.
Bill Oehlke