This bug is big…
Dear Bugman,
I found this bug on our inside garage window, Buffalo, WY (high desert). I thought the noise must be coming from a large bee or something because of the loudness of the buzzing. I have looked some on the internet, but can’t seem to find a match. I hope some of the pics are helpful. It is an inch long from front to back of the wing. If you look it in the face, it looks like a bulldog.It has a kind of shell over its thorax, similar to a beetle. It’s mainly curiosity to know what it is, as we have only seen one. However, we do have small children and a dog, so if it’s a nasty, I need to know. Thanks!
darla. Buffalo, WY 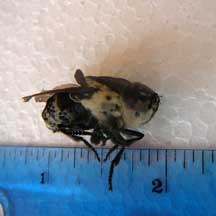 The Thing from Missouri is possibly a Soldier Fly Larva