June bug in July?
Hello,
We just moved into our new house located in the middle of Maryland, just west of Baltimore, in late May. In mid to late June I saw some patches (5 to 10 bugs) of fairly large bugs flying around in a section of the yard. As of yesterday, that number has increased exponentially. There were easily several hundred, if not a thousand or more of them flying around. They don’t seem to be eating anything and as the day wore on and got hotter, they seemed to disappear, I assuming in the grass. Looking through your beetle list, they come close to the June Bug. Will they do any damage to my lawn and how can I get rid of them? Any help? Thanks,
Dan 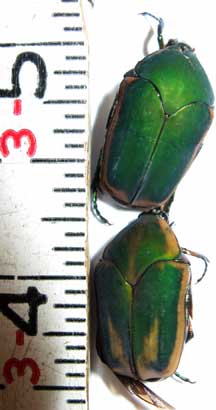 Hi Dan,
You have Green June Beetles, sometimes called Figeaters, Cotinis (occasionally Cotinus) nitida. While researching this swarming behavior, of which we have received other reports in the past, we found that occasionally large numbers will swarm over grassy areas on warm sunny days. The National Parks Services Integrated Pest Management page has much information on the Green Fruit Beetle including: ” The green June beetle ( Cotinus nitida ) adult is usually 3/4″-1″ long, and 1/2″ wide. The top side is forest green, with or without lengthwise tan stripes on the wings. The underside is a metallic bright green or gold, bearing legs with stout spines to aid in digging. In the mid-Atlantic region the names ‘June bug’ and ‘June beetle’ are commonly used for this insect, while they are called “fig eater” in the southern part of their range. They should not be confused the familiar brown May or June beetles that are seen flying to lights on summer nights. The green June beetle adult flies only during the day. The larvae are white grubs often called ‘richworms’ because they prefer high levels of organic matter for food. With three growth stages, the beetles develop similarly to the other annual scarab species. Their body lengths reach 1/4″, 3/4″, and 2″ respectively. The larvae have stiff abdominal bristles, short stubby legs, and wide bodies. One unique characteristic of this grub is that it crawls on its back by undulating and utilizing its dorsal bristles to gain traction. Other typical white grubs, like the Japanese beetle grub, are narrower, have longer legs, crawl right side up, and when at rest assume a c-shaped posture. This species is native to the eastern half of the United States and overlaps with Cotinis texana Casey in Texas and the southwestern United States. The adults generally do not feed but occasionally become pests of fruit. Any thin- skinned fruit such as fig, peach, plum, blackberry, grape, and apricot can be eaten. The principal attraction is probably the moisture and the fermenting sugars of ripening fruit. They occasionally feed on plant sap. In turf situations egg-laying females are attracted to moist sandy soils with high levels of organic matter. Turf areas treated repeatedly with organic fertilizers, composts, or composted sewage sludge become more attractive to the female. The grub feeds on dead, decaying organic matter as well as plant roots. This species is commonly associated with both agricultural crop and livestock production areas as well as urban landscapes. Field-stored hay bales, manure piles, grass clipping piles, bark mulches, and other sources of plant material that come in contact with moist soil provide prime microhabitats preferred by both the female for egg-laying and the migrating third instar grubs. The green June beetle completes one generation each year. Adults begin flying in June and may continue sporadically into September. On warm sunny days, adults may swarm over open grassy areas. Their flight behavior and sounds reassembles that of a bumble bee. At night they rest in trees or beneath the thatch. After emerging, the adult females fly to the lower limbs of trees and shrubs and release a pheromone that attracts large numbers of males. Frequently, males repeatedly fly low and erratically over the turf trying to locate emerging females. After mating, females burrow 2″-8″ into the soil to lay about 20 eggs at a time. The spherical eggs are white and almost 1/16″ in diameter. Most eggs hatch in late July and August. The first two grub stages feed at the soil thatch interface. By the end of September, most are third instar larvae and these large grubs tunnel into the thatch layer and construct a deep vertical burrow. The grubs may remain active into November in the mid-Atlantic region. In the more southern states grubs may become active on warm nights throughout the winter. In colder areas they overwinter in burrows 8″-30″ deep. The grubs resume feeding once the ground warms in the spring and then pupate in late May or early June. The adults begin emerging about three weeks later. “

Scarab Beetle Pupa from Serbia
What's That Bug? does not endorse extermination


24 Responses to Swarming Behavior in the Green June Beetle