Eight Legs + Two Claws — Insect?
Hello,
I love your site. After my grandmother was attacked in Arkansas by a very aggressive, female, Dobson fly, my love of insects has only increased. Your site has provided hours of fantastic information and wonder. I finally found out what a house centipede was. But now I have an unknown, which I submit with pictures. I live in Minneapolis in an apartment building. Today I found crawling on my wall a fairly small, maybe 3-4 mm long, eight legged creature with an additional two large crab-like claws in the very front. Its body is very similar in shape and coloring to a cockroach nymph. The creature carries its claws in front of its body in much the same way a crab would, slightly extend and slightly raised. Additionally, the creature uses its claws in much the same way a crab would. It seems to regularly bring a claw to its mouth and “taste” what’s on the claw. Please review my photos and tell me what you think. I can’t seem to find anything on the net that even hints and what this might be. Thanks a million Bug Man!
PS – On closer inspection it appears this creature has no antennae.
Ellen 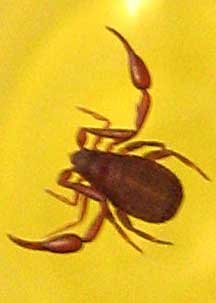 Hi Ellen,
This is not an insect, but an Arachnid. It is a harmless Pseudoscorpion. Pseudoscorpions are quite harmless, but they are fierce predators if the prey is small enough for them to capture. They are known to catch and eat house flies much larger than themselves.  We get submissions of Pseudoscorpions from around the world.

Bug of the Month May 2012: Pseudoscorpion
Tagged with → Top 10
What's That Bug? does not endorse extermination