assassin but
Hi.
I live in Cleveland Georgia. My apple tree is being eaten by Japanese Beetles. I read quite a bit about them on the web and mostly learned there are no nature enemies of them. BUT a couple of days ago when I was picking them off my tree, I ran across this threesome. Only 2 of the bugs are clear – the dead/dying J/B and the bug on the bug eating the J/B. I’ve been told it is an assassin bug and after searching the web, I’m figuring it is the blood sucking conenose. Is it? Since this pic, I have found another one in a flowering bush that also is infested with J/B’s. They have not acted aggressive, even when I have almost touched them. Because they like the beetles, I don’t want to run them off!!! Thanks,
Beth 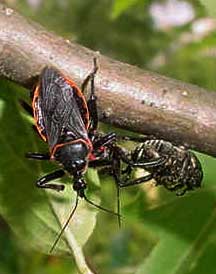 Hi Beth,
We are guessing that you meant Assassin Bug and not “Assassin But” in your subject line. This is not a Blood Sucking Conenose. It is a Bee Assassin, Apiomerus crassipes and BugGuide has a detailed photo for comparison. We doubt that there are enough predators out there to significantly curb the Japanese Beetle emergence each year, but it is nice to see the Assassin Bugs are trying.